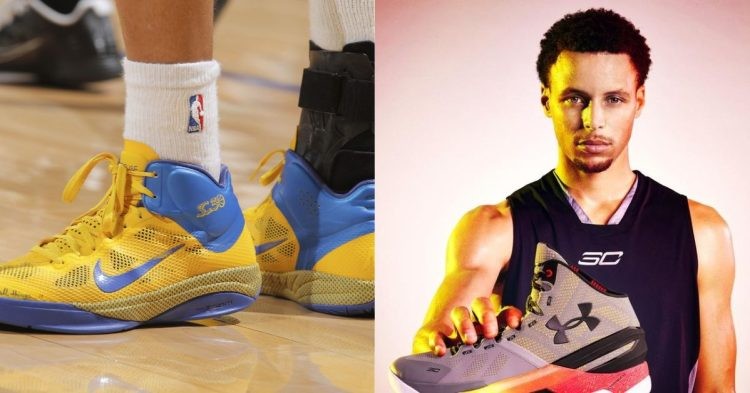 Stephen Curry has been arguably the best player this season to guide the Golden State Warriors to their 4th title in 8 years. His performances in the Finals have helped him take home the MVP trophy this year. He averaged a whopping 31.2 points, together with 6.0 rebounds and 5.0 assists.

Recently, there were rumors that Steph’s exceptional plays were possible because of his lucky shoes. In Game 4, he made an unbelievable 43 points against the Boston Celtics. He was wearing the Under Armour Curry 4 Flowtro’s that game. Many believe that any time Steph wears them, there is no doubt about the Warriors winning the game.

The Warriors wasn’t always an athlete of Under Armour. He was signed to Nike till 2013, before switching to Under Armour. It was a situation that no one really knew the reason to.

Back in 2013, Nike had LeBron James, Kevin Durant, and many more stars on their roster. Steph’s aim was clear; to mark his name in a brand bigger than his NBA career. He wanted to build a brand with a signature shoe and be the face of the brand.

Steph signed with Under Armour in 2013, two years before he released his first signature shoe, UA Curry 1s. Apart from the other reasons, Draymond Green managed to figure out one more reason for Steph choosing Under Armour over Nike.

One of the main reasons why Steph chose UA was the potential to build a brand. He said “the fact that I got to go and you know… get in the signature shoe game, build a brand, be able to inspire, story-tell around things that are important to me”.

Draymond Green asked whether Steph would have made the switch to UA if he didn’t go for his $44m contract. Before answering the question, Steph mentioned that no one apart from DG was able to connect the relationship between his switch and his contract.

He mentioned that when a player receives a contract, he’d have to choose whether he wants to take a bet. Later, he claimed that, “I had four years on the court, I got to survey the free agency situation and just see where I was at…in that part of my career.” It seems like Curry wanted to start something from scratch and build his career again by taking an underpaying contract. Together with that, also signing with a new brand.

Nike missed out on Stephen Curry by $1.5 million.

Time for a thread 👇👇👇 pic.twitter.com/CuAf0SvPgX

Curry decided that he was going to do that with Under Armour since he did not want to miss out on an opportunity where a company invests in him. It seems like the deal has worked out well for both Steph and Under Armour. Unfortunately for Nike, Steph’s first signature shoe generated more than $160m in 2016.