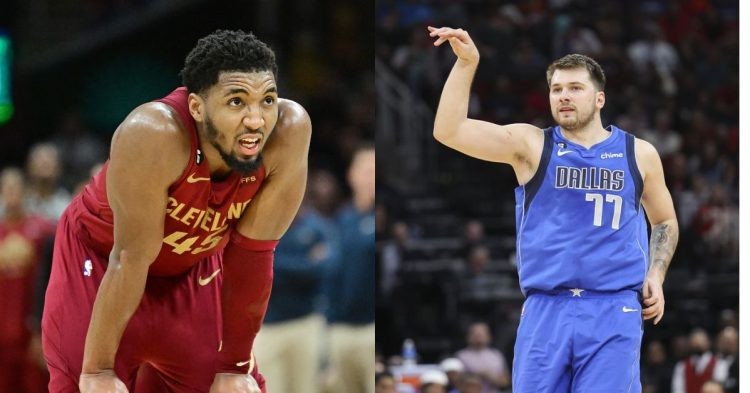 Donovan Mitchell and Luka Doncic on the court (Credit: Twitter)

Donovan Mitchell found himself under a random drug test after his historical 71-point performance against the Chicago Bulls. Not only did the Cavs star manage to have the best scoring night of this decade, but he also racked up 11 assists and 8 rebounds to go along with the 71-point bomb.

So Donovan Mitchell puts up a stat line of 71-11-8 and the nba decides to drug test him. Of course it’s random. 🙄

It would appear that the NBA felt this was just not humanly possible. As a result, Mitchell and the other Cleveland Cavaliers were made to participate in a drug test. We soon found out about this after Donovan shared a tweet explaining to the world that he had just been tested.

Andddd just like that we are drug tested this morning 😂😂😂 https://t.co/LvlbcPDucP

Fans certainly had a lot to say about this issue. After all, we are seeing near-inhuman performances on a nightly basis. Therefore, it is really fair for Mitchell alone to be tested?

As some of us might know, the NBA organizes 4 random drug tests on its players during the regular season. Additionally, they also conduct 2 tests in the offseason. The goal of these tests is to focus on performance-enhancing drugs.

Live look at Adam Silver waking up Donovan Mitchell at 5am for a random drug testpic.twitter.com/qYwRGnrVxB

These could include Steroids, Human Growth Hormone, Beta-blockers, and various other substances that give the athlete an edge in a physical competition. Fans feel that even testing players who dominate the league for drugs makes no real sense, “They really drug-tested Donovan Mitchell after that 71 point game?! Tf drugs are there that make you better at basketball? If so put the whole league on that drug.”

The really drug tested Donovan Mitchell after that 71 point game?! Tf drugs are there that make you better at basketball? If so put the whole league on that drug

They drug tested Donovan Mitchell after that 71. They said my boy had to be on dope 😂 that’s wild

While performance enhancers certainly improve the physical capabilities of an athlete, Perhaps it is unfair to just put Donovan through all of this. Especially when  Luka Doncic has been putting up just as extraordinary numbers over the past few games, “Why didn’t they drug test Luka?”

how the league gon drug test donovan mitchell and not giannis

Fans mused that Spida’s play was so sensational that the NBA had no choice but to drug-test him. Moreover, they were also completely skeptical of the fact that this test was truly ‘random”. In any case, we are quite confident that Mitchell will test negative for this test and be cleared of all suspicion.