Why Is Kyrie Irving Called Uncle Drew? – How Did He Get the Nickname? 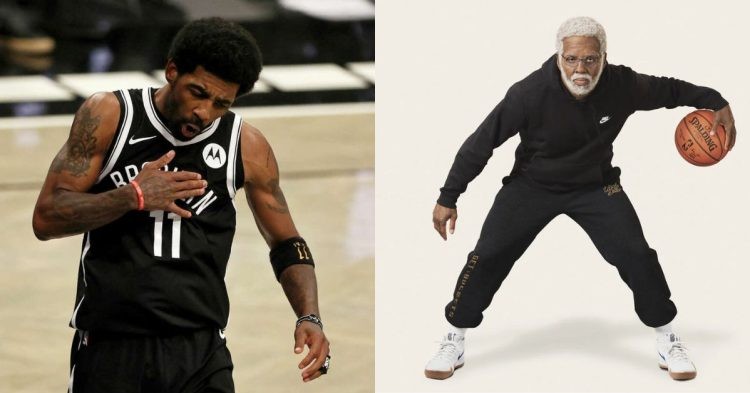 Great play in NBA basketball is awarded trophies, titles, and money. But being a fan-favorite revolutionary talent gets you something much better. A nickname that you’re associated with for the rest of your career. They can sometimes be awful but most times be the name of identity. The same is the case for Kyrie Irving.

Some of the best nicknames are different from the most iconic nicknames. Air Jordan, Black Mamba, King James, and Chef Curry are iconic for what they’ve done with their play on the court. Chocolate Thunder, Greek Freak, and Dr. Dunkenstein are just purely amazing. They all make you think of one player and the legacy attached to the name. All of them even have a story about how that nickname took off.

Kyrie Irving was drafted as the first overall pick of the 2011 draft. During his time in college basketball for Duke, his play was extremely flashy with his amazing ball-handling skill. He had played just 11 games and averaged 17 points per game, 4 assists, and 1.5 steals per game. He showcased so much talent in that one year that being the 1st overall pick was almost a non-question.

It took him just 2 seasons before he was voted into the all-star team. It meant that he was loved very early on. Brands like Pepsi took advantage of his rise by shooting an ad with a very different idea. They noticed his style of play is similar to that of streetball but something that was also timeless. They dressed Irving as an old man that loves the game of basketball and can still outplay current players because of his fundamentals.

He was named Uncle Drew. However, they did not predict how viral this would go. That led to the Ad being more than just one video. If you combine all the clips they shot and telecasted for this campaign you could get a 20-minute short film.

That advertisement stuck will all the fans and it became a cult classic. With Irving’s rise in quality of play in the NBA the name just spread. In 2018, ‘Uncle Drew’ jumped from the TV screens to the cinema screens as they created one of the funniest but best basketball movies of all time. The cast included other big names like Shaq and Reggie Miller too. But the star was still Kyrie Irving playing the lovable old man ‘Uncle Drew.’