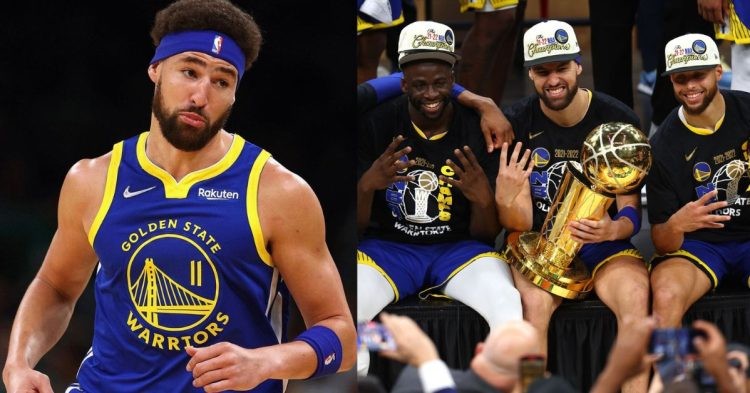 Klay Thompson recently became an NBA champion once again for the 4th time with the Golden State Warriors. The recent title marks the continuation of the dynasty that the Warriors have created since Klay joined the franchise. The Warriors drafted the American in 2011 as the 11th overall pick in the NBA Draft.

The 32-year-old had returned from his long-term injury this year. His last game was against the Toronto Raptors in the 2019 NBA Finals which happened in June. He made his comeback on January 9th, 2022, after more than a year.

Klay Thompson talks about his future with the Golden State Warriors

During Draymond Green’s talk show, Klay Thompson was asked if he was planning to end his playing career with the Warriors. To this, Klay showed his loyalty to the organization with his reply but mainly to Steve Kerr. He said, “I’m going full Michael Jordan and I’m aligning myself with Steve and I ain’t playing for anybody but Steve.”

Steve Kerr took over as the head coach of the Warriors in the 2014-15 season. Since then, he has helped to form a dynasty with his players and won 4 titles in just 8 years. Klay Thompson has been vital to the Warriors’ success and his absence during his injury was obvious when the Warriors could not win titles for a few years.

Klay also mentioned that he was grateful to be part of a team that is mentioned along with the greatest. He is ecstatic about the fact that the Warriors are in contention to be the best team ever alongside the Lakers, Celtics, and Bulls. Just like the Warriors are now, these teams were once major powerhouses in the league. Every team feared them as all they knew back then was to win, win, and win.

In addition to that, Klay pointed out the fact that the Warriors have young and talented players returning for the next season, together with the main core of the team. He also added that “it is going to be scary for the NBA”. His words come out as a warning to the other teams in the league. This is similar to last year when Steph Curry said “you don’t want to see us next year”.