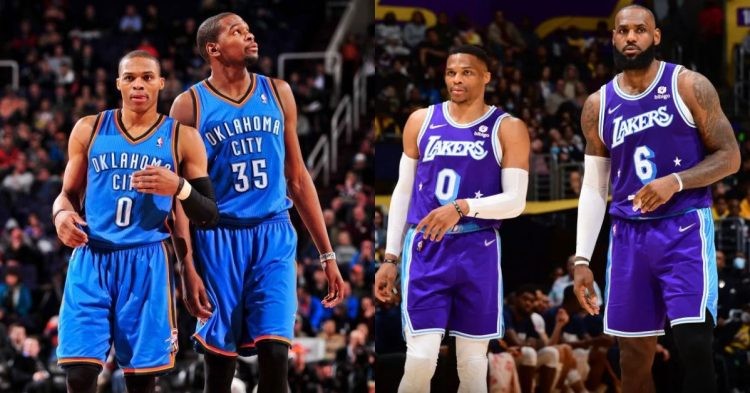 The Los Angeles Lakers have kickstarted their 2022-23 NBA season and it hasn’t gone well so far. After missing the playoffs in consecutive seasons, the Lakers were looking to bounce back this year. However, that has taken a step backward as they are still searching for their first win after 3 games. Amid this, Russell Westbrook has been heavily criticized by fans once again.

Westbrook was always a decent player for the Lakers. Even though he could not fill in LeBron James and Anthony Davis‘ during their absence, he still managed to get the job done at times. However, Westbrook has not been having a great time on the court currently.

His shooting has come under fire many times by many as he only averages 10.3 points per game so far. All the eyes have been on him after disappointing performances shooting-wise. In addition to that, the 33-year-old has also received hate for the fact that he refused to join the huddle that Patrick Beverley tried to call for before a game.

It’s the preseason and I don’t read much into anything. But if I were to read too much into something………. pic.twitter.com/Hgcb91PNu5

However, amid the criticism Russ has received for his decision, he has received support from a former teammate.

Kevin Durant believes everything Russell Westbrook does will be magnified

Brooklyn Nets star Kevin Durant came out in support of Westbrook and had his say on the slander he’s been receiving lately. In an interview with Boardroom, KD said, “Russ always did that. It felt like he was getting his mind right…Just his own routine before the game. But if you play in LA, you’re playing next to the biggest figure in sports, LeBron James, everything you do is going to be magnified.”

.@KDTrey5 on the criticism Russell Westbrook has been receiving:

“It’s like now you’re making him the butt of your jokes. … The dialog around our game is just so toxic at this point. I get criticism [on the court], but it’s starting to turn into something else right now.” pic.twitter.com/jRd8bs5eFS

As Durant doesn’t believe the criticism Westbrook receives is fair, he also explains it. The Nets star mentions that everything Russ does will be magnified. That would mainly be because Russ is playing with arguably the GOAT of the NBA with LeBron. In addition to that, he’s also playing for the Lakers, who are also arguably the greatest franchise of all time. Both of those two factors put together will attract attention easily.

One might think playing at such a place might add pressure for Westbrook, but he has been an NBA star over the years as well. He formed a formidable duo with KD at OKC back in the day. Similarly, Durant mentions that Westbrook has to be on point since the eyes are all on him right now.