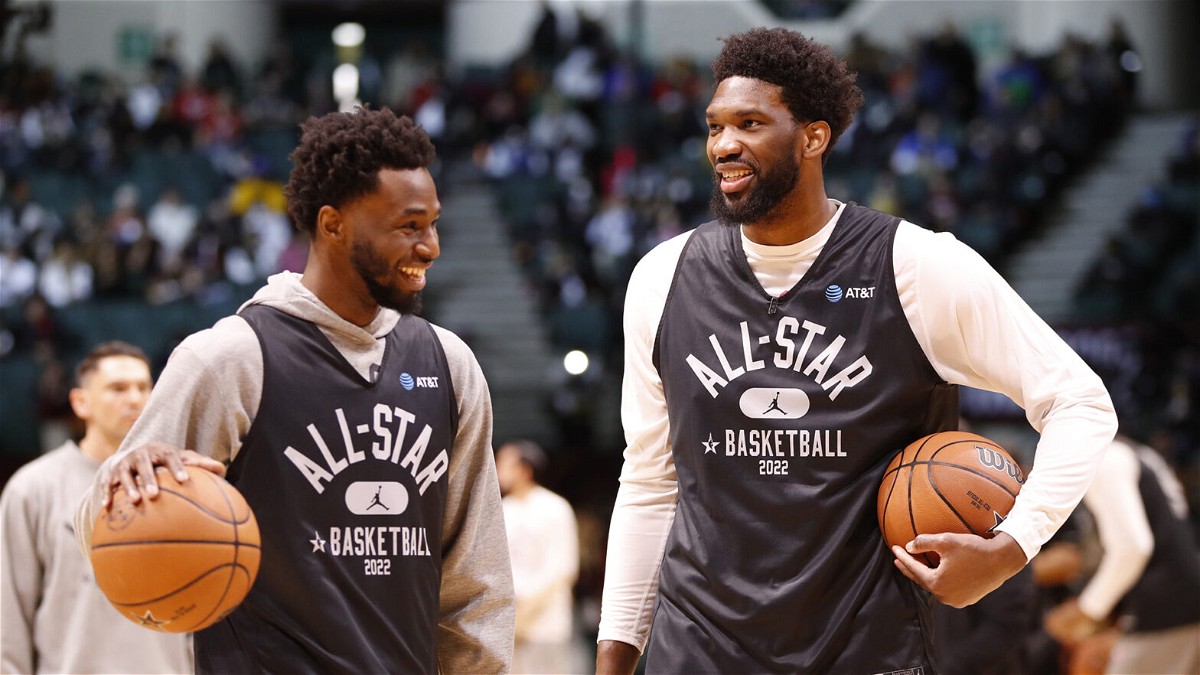 NBA All-Star 2022 weekend in Cleveland is well underway. The lead-up to the All-Star game is highlighted by the Mountain Dew 3-point Challenge and the Slam Dunk Contest. But part of the weekend’s itinerary is also an open practice session by the All-Star teams. Andrew Wiggins took to the floor for Team Durant alongside his All-Star teammates, including Joel Embiid.

Widely considered the unlikeliest All-Star of all time, Andrew Wiggins makes his first appearance at an All-Star weekend ever. And in the process, he became only the third player ever to be a first-time All-Star starter in his 8th season or later. The Canadian forward has been an integral part of the Golden State Warriors side that sits 2nd in the West.

There has been much criticism in the wake of his selection owing to a K-pop star’s support. The push from K-pop star and Warriors global ambassador, BamBam, helped him gather 1.8 million fan votes.

It’s the best time to begin 2022! He is one of the best two-way players!
Wiggs deserves to be an All-Star, vote Andrew Wiggins into the 2022 NBA All-Star Game..and I can’t wait to meet you all very soon#AndrewWiggins #NBAAllStar pic.twitter.com/bpOXKAJ920

The uproar about the All-Star debutante’s selection cites Luka Doncic as a major snub. Luka is a genuine All-NBA First Team contender and has been tearing the league apart since his return from injury.

But any blame towards Wiggins is unwarranted as the NBA’s voting restrictions only allow 2 backcourt spots. Which deservedly went to Ja Morant and Steph Curry and Luka is not considered a frontcourt player.

A customary practice during open sessions at All-Star weekend is half-court shots from the players. Amidst a frenzy of basketballs, players attempt to hit the logo shot and put on a show. The obvious, popular choices to nail this shot are Steph Curry, Luka Doncic, and Trae Young among others.

But the surprise pick, just like his All-Star selection, was Andrew Wiggins.

The Golden State forward drained 3 consecutive 3-pointers from the halfway point to garner some of his teammates’ attention. And their inevitable banter. Joel Embiid tried to connect the dots and questioned his Team Durant teammate.

“You went to Golden State and you turned into a Splash Brother too?”

"You went to Golden State and you turned into a Splash Brother too?"

This exchange between Joel Embiid and Andrew Wiggins 😂

Trae Young chipped in too, “I’m saying you gotta go to Golden State one time!”. Wondering if the San Francisco team has that magical effect on shooters.

But there is truth to Joel Embiid’s observations and they are not unfounded. Wiggins is experiencing a massive uptick in his 3-point shooting percentage this season. Unsurprisingly, the trend has been upward ever since he joined the Warriors in the 2019-20 season. He has shot a career-high 41.4% from behind the arc this season, and he had never shot higher than 38%.

Warriors fans will be looking forward to his debut at the All-Star game tomorrow facing off against Steph Curry and Team LeBron.