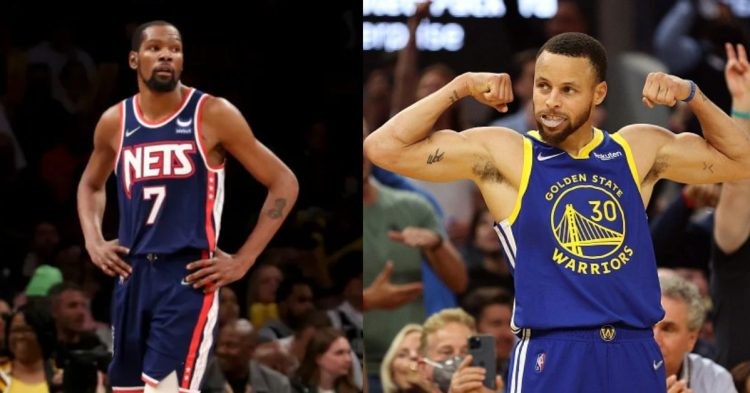 NBA superstar Kevin Durant has had quite a disappointing stint with the Brooklyn Nets so far. In his 3 years there, he has won all of one playoff series in 2021 against the Boston Celtics. This is despite having a loaded superteam with Kyrie Irving, James Harden, and several other prominent players.

Basketball fans will remember Kevin Durant’s dominance during his time with Stephen Curry and the Golden State Warriors. It would interest many people that he crushed LeBron James and the Cavaliers two years in a row in the NBA Finals. One series went 5 games. The other was a clean sweep and ended in 4 games.

Thus, there is no arguing that what KD and GSW had was something special. He recently stated that the Brooklyn Nets should adopt similar methods if they wish to contend for a title. He also speaks glowingly of Stephen Curry, his former teammate. It is important to understand what Durant said and analyze how much truth there is to it.

There is no arguing that the Nets have been a troubled basketball team. It is easy to point fingers at players on the team like Kyrie Irving and former players like James Harden. However, there is no denying that Kevin Durant also feels accountable and just simply hates losing.

Thus, he drew comparisons and described what he felt his team lacked, “ I’m like, we shouldn’t be losing some of the games that we lost, regardless of who was on the floor. I was more so worried about how we were approaching every day as a basketball team, and I felt like we could have fought through a lot of the stuff that I felt held us back and championship teams do that”.

It is impossible to deny that Kevin Durant has a valid point. We were all stunned when the Brooklyn Nets were swept in the first round by the Boston Celtics. However, we forget that the Nets were a struggling team and finished the season as the 7th seed. On the other hand, the Celtics turned up the pace incredibly in the second half of the season and finished as the 2nd seed.

Thus, it is no real surprise that they ended up losing. Durant spoke about Steph and how he fought through it all with a sense of adversity hit. After all, GSW went down 2-1 to the Celtics in Game 3 before the series turned around dramatically for them.

“ You’ve seen it, Stephen Curry and the Warriors, he was injured going into the playoffs. Luka, he was hurt. But his team still fought and won games. I felt like we had enough talent to do that…”

We cannot help but empathize with how Durant is feeling. Hopefully, his team is able to get it together in time to become a legitimate contender for the 2022-2023 NBA season.