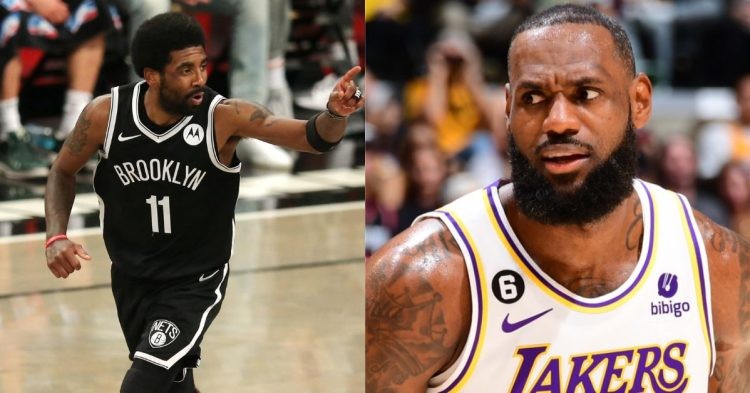 Brooklyn Nets star Kyrie Irving sharing a link to an anti-semitic movie has the NBA world and media lit up. This is a sensitive time and generation that we live in. Despite having freedom of speech and expression, people must use their platforms carefully.

?? What Kyrie do? Postva link to a movie?

Some people are very critical of Irving’s actions and have made their opinions clear. They even drew comparisons between what Irving did to former Phoneix Suns owner Robert Sarver. Fans have even tried to rope in LeBron James and other NBA stars into the tense situation.

Are you suggesting that the league mete out a punishment for Kyrie’s opinions about Jewish people because they wanted to punish Robert sarver, owner of a franchise, for sexual harassment?

Now that things are getting out of control, one should wonder why people feel the need to compare Kyrie Irving and Robert Sarver. Additionally, understanding how other NBA players feel about this is also crucial to dealing with this.

Racism is one of the greatest evils in humanity, one that we still see in some form, regardless of demography. We all know that King James is one of the most outspoken people when it comes to discrimination against people of color.

However, racism isn’t something that merely supports African American people. It can be applied in any case where a false perception is created. The documentary Irving promoted is considered heavily controversial and seems to instigate hatred toward Jews. It claims that African Americans are the true Jews who should take control. Moreover, it also shows Jews to be the ones responsible for the slave trade and portrays them in a bad light.

That is why Brooklyn Nets owner Joe Tsai was one of the first people to draw attention to and condemn these actions. NBA fans were quick to point out the hypocrisy when Jews were the victims and not black people.

“NBA players were all “zero tolerance” when it came to Sarver and now they dead quiet for Kyrie.”

NBA players were all “zero tolerance” when it came to Sarver and now they dead quiet for Kyrie.

It is quite unfair to compare both situations. Robert Sarver was accused of racist conduct and sexual harassment in the workplace. On the other hand, all Kyrie did was post a video. This sparked a debate between fans over this statement.

Just so we’re all clear on who you are

Tweeting out a link to a documentary sold on Amazon??

LeBron James was instantly thrown into the conversation due to his bond with Kyrie and his voice as an activist against discrimination. People accused him of having a blindspot towards people he personally knows.

Lebron is quick to call out racism but is mighty silent when the dude he knows is actively being racist. That’s just one blindspot he has that makes me go🤔

In any case, many ridiculed the comparison due to the differences in the cases of Sarver and Irving. There is also an active debate on whether Kyrie should face any form of punishment for the events that have happened.