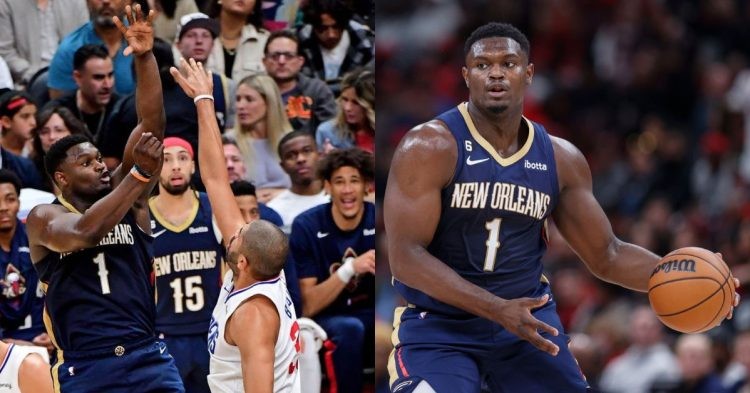 Zion Williamson landed in the NBA back in 2019 after being drafted first overall by the Pelicans, before he even played a game people were hyping him up to be one of the best NBA prospects of all time. Williamson gained fame at an early age when his high school mixtape went viral. Anyone that watched that tape could tell you that Zion was an athletic anomaly and would go on to be great.

But it doesn’t take a long time for people to flip the narrative. During his first year with Duke, he was praised for his NBA-ready body, standing tall at 6’6 and weighing well over 280+ pounds.

Williamson’s playstyle is very aggressive, he attacks the rim using his athleticism and verticality. However, at his weight, this became a cause of concern for Zion.  Many legends of the game weighed in with their opinion and said that if he doesn’t lose some weight it’ll be bad for his knees.

Soon after even the media only had one thing to say when they talked about Zion Williamson, his weight. Zion was not happy with the kind of attention that people were giving to his body of all things. This is what he had to say when asked about how that made him feel “The writers and stuff, if they have children of their own, imagine if somebody talked about their child how they spoke about me…Every time they talked about me, it was about weight…I don’t even think they realized what kind of impact that can have on you”

“The writers and stuff, if they have children of their own, imagine if somebody talked about their child how they spoke about me…Every time they talked about me, it was about weight..I don’t even think they realized what kind of impact that can have on you.”

All of this is irrelevant now that Zion is back in shape and his dominant self. He even received some high praise from Shaquille O’Neal who was amongst the people that expressed their concerns over his weight. This is what Shaq had to say, “the big boy is back and looking great.” Williamson has never looked healthier in his life and with the kind of season he’s been having, he deserves his flowers.

Zion has picked up exactly where he left off back in 2020-21 when he averaged 27.0 points per game. If Zion can stay healthy and keep performing like this then we might finally get to see him realize his full potential.

Williamson has been posting stat lines like this night after night, and it’s only a matter of time before he explodes and starts dominating the game.