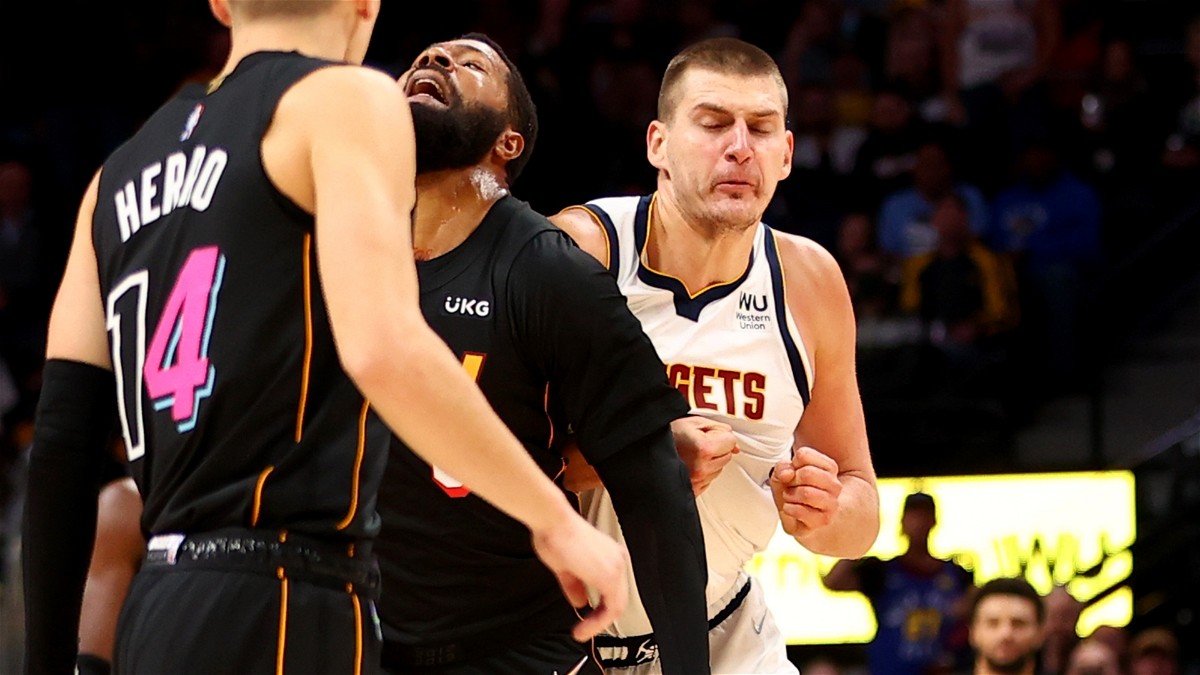 Reigning MVP Nikola Jokic was in a heated altercation with Miami Heat‘s Forward Markieff Morris Monday Night. This grabbed the attention of the family members of both parties involved. While Marcus Morris stated that he noticed what happened to his twin, Nikola Jokic’s brothers did not hold back either.

During the final few minutes in the game on Monday night between Miami Heat and Denver Nuggets, Markieff Morris committed a hard foul against Nikola Jokic. It was highly unnecessary as Miami’s loss was unavoidable. After the shove my Morris, Nikola Jokic gathered himself and went for a hard push.

Markieff Morris was visibly in a lot of pain after the push by Jokic and took to the floor. Tyler Herro, Jimmy Butler and others rushed to his defence while referees and coaching staff tried to separate them. Jimmy Butler, instead of calming the situation down, escalated the matter further by challenging Jokic to meet him outside for a ‘talk’.

Bulter is known for standing up for his teammates whenever a situation like this arises, however, this time it has led to a fine by the NBA. The league took notice of the altercation and punished Nikola Jokic with 1 game suspension and Markieff Morris was fined $50K. Jimmy Butler was fined $30K for failing to comply with NBA’s security interview.

Miami's Jimmy Butler has also been fined $30,000 for attempting to escalate altercation and failing to comply with NBA's security interview, league says. https://t.co/OD1RL50ZNn

Nikola Jokic reflected on his impulsive reaction to the dirty foul post-game.

“I don’t know who showed me the clip but [Morris’] head snapped back. I felt really bad.”

Clearly. he was remorseful for his behaviour and as a result, he will miss the game against Indiana Pacers which can be crucial to their ranking in the western conference.

Soon after the altercation, Marcus Morris took to Twitter. Although he did not make any direct threat to Nikola Jokic the tweet seems to be directed towards the Denver Nuggets Center. The Morris brothers have been involved in a lot of fights throughout their career in the NBA. However, it never reached the point where they were threatened by the family members of other players.

Waited till bro turned his back smh. NOTED ✍🏾

After Marcus Morris tweeted in his brother’s support, Nikola Jokic’s brothers took to Twitter as well in the MVP’s defense. They created a Twitter account just for this purpose and stood up the Morris Twins.

Living by their word, it is alleged that Jokic’s brothers will be in attendance for Miami Heat vs Denver Nuggets on November 29th for which they have already booked tickets. The outcome of that game will be interesting to see especially after the altercation between Jokic and Morris.

Markieff Morris, despite taking the heard hit, did not have the sympathy of fans. Twitter believes Nikola Jokic’s reaction to the dirty foul was justified. Morris gave in to the frustration of losing in the final minutes and committed the foul, however, Nikola Jokic should’ve taken the high road.