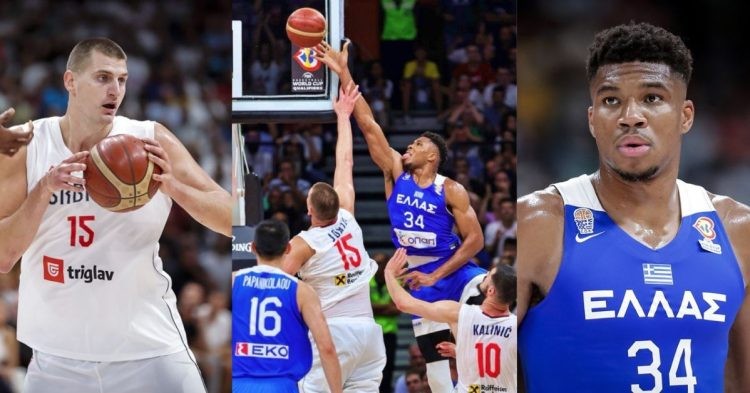 The World Cup qualifiers are underway and the games have not been disappointing us so far. Serbia took the game against Greece last night as they won 100-94. However, the matchup between Nikola Jokic and Giannis Antetokounmpo turned out to be the highlight of the game.

Both players were refusing to back down without a fight and were eager to help their respective countries win. Giannis and Nikola are two of the NBA’s best players. They come off from a decent season in 2021-22. When they go head-to-head, Jokic has won 8 times whereas the Bucks star only has 4 wins. Last night’s game was a reminder why they both were world-class players and are in their prime.

On the night, Giannis was a better scorer. He made 40 points, 8 rebounds, 5 assists, and 2 steals. After the game, he also tweeted, “Keep up the fight.”

On the other hand, Jokic also had an electrifying game. He may not have made as many shots as Giannis, but that makes sense considering the position Jokic plays at. He scored 29 points, together with 8 rebounds and 6 assists.

One-legged, wrong-legged, turnaround fadeaway from the corner over Giannis Antetokounmpo 🤯

What an INSANE shot by Nikola Jokic 🔥pic.twitter.com/tb0ppl1hTF

The win wasn’t the only highlight of Nikola’s night. During the 4th quarter, he managed to get a fadeaway shot from the corner against Giannis himself. Now a fadeaway shot itself is hard to do when you’re stumbling and trying to gain balance. The Nuggets star did the magical move against one of the best defenders in today’s game like it was nothing.

Be that as it may, Greece’s loss doesn’t mean the Bucks superstar has not been performing. A couple of weeks ago, Greece defeated Poland in a game in a score of 101-78. Giannis was once again the star of the team as he led the scoring charts with 24 points. 12 of them came from free-throws when the player shot 19.