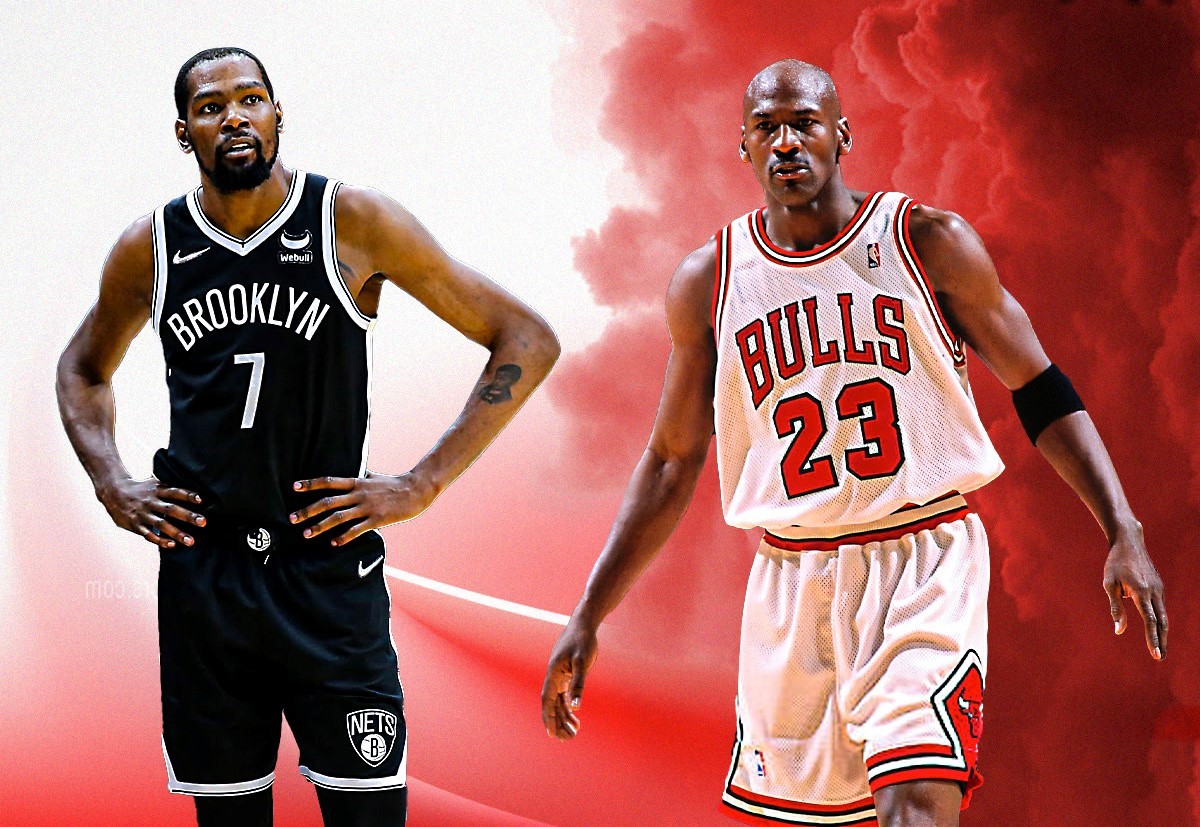 Kevin Durant is one of the most accomplished scorers of the modern era. His 4 Scoring Champ titles are sufficient proof. He has also been the subject of comparison with Michael Jordan since his time at the Golden State Warriors. 2 NBA championships in just 3 years at the Warriors and the Finals MVP awards likened the two a lot.

Likewise, their scoring touch is also eerily similar. Michael Jordan is by far the greatest scorer ever, with 10 Scoring Champ titles. He is 5th on the all-time NBA scoring list with 32,292 points. But not too far behind is the Brooklyn Nets superstar, Kevin Durant, on 24th with 25,526 points.

What would it take for KD to surpass or match MJ’s scoring record? To determine just how probable is Durant to overtake Jordan, we need to spend some time with the calculator. And his career stat sheet. So let’s dive in.

Kevin Durant is 6,766 points away from Michael Jordan

Over the past few seasons, Durant has played fewer games than ever. A major Achilles injury even kept him out for a full season. Age is playing a part in his fitness and reducing the number of games he’s playing. However, his scoring averages have only bettered after arriving in Brooklyn. From 26.6 points per game to 28.7 since he began life at the Nets.

But with fewer games played, the total points he is scoring have gone down. And nowhere near 2000+ point totals that he averaged before coming to the Warriors. But the decrease in games played and increase in points scored means we can use his career stats as foreseeable estimates without any adjustments.

So, going by his entire career, we can estimate that he plays around 67 regular-season games per season. His career scoring average stands at 27.2 points per game. These averages total to about 1822 points per season.

Therefore, the 6,766 point deficit to Michael Jordan can be matched and surpassed with ease in 4 seasons. That is if Durant scores at a minimum rate of 27.2 points per game and plays over 67 games a season.

The 12-time All-Star is 33 years old now, and in his 14th season in the NBA. Our projection of 4 seasons would make him 37 years old and in his 18th season. Undoubtedly, it is difficult to see him sustain such high averages but KD is not one to give up.

But LeBron’s recent high-scoring season where he himself reached 2nd on the all-time list is proof that old legs can still do it in the NBA. The Grim Reaper will take inspiration from the same. Although he has stated earlier that he could see himself walking away from the game at the age of 35, his failure to win another ring will fuel him on.

Durant may or may not match Jordan (he will!), but he will certainly end his career in the top 10 of the all-time scoring list. And thus comfortably cementing his case as one of the greatest scorers of all time.