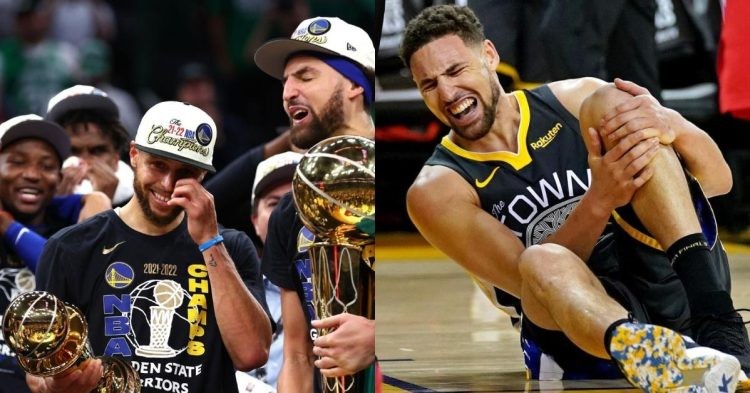 The Golden State Warriors are your NBA Champions in 2022, but their return to the top hasn’t been easy. The Golden State Warriors last appeared in the NBA Finals in 2019. They were up against Kawhi Leonard and the Raptors in what was shaping up to be an exciting series, but the Warriors were dealt a terrible blow when KD went down with a season-ending injury. Klay Thompson then suffered a season-ending injury shortly after.

Stephen Curry was the only one left to carry the weight after the Warriors lost their two finest attacking weapons. They went on to lose in six games in the finals. The Warriors had lost a lot of their firepower heading into the 2019-2020 season, and it was about to get worse. Kevin Durant decided to quit the franchise and join the Brooklyn Nets during the offseason.

He didn’t leave them for nothing, though, and agreed to be a part of a sign-and-trade deal that helped the Warriors land, D’Angelo Russell. This was their starting lineup at the start of the season: S. Curry, D. Green, K. Looney, G. Robinson, and D. Russell. In comparison to their lineup from the previous season, this is a significant drop-off. Stephen Curry injured his arm just four games into the season and missed the majority of the season.

The Warriors weren’t going to win anything now that all of their key players were injured. As a result, Steve Kerr made the wise decision to use this opportunity to give the youngsters more playing time. This turned out to be a fantastic decision that helped Jordan Poole’s development greatly. The Warriors also made a great move by trading D’Angelo Russell for Andrew Wiggins.

The Golden State Warriors since 2014:

The Warriors finished the 2019-20 season with the league’s worst record. Yes, this team reached the NBA Finals in 2019, but they couldn’t even pass the 15-win mark a year later. But this was a positive result since even if the Warriors made the Playoffs, their chances of winning a championship were little to none.

The Warriors went on to choose Wiseman with the second overall pick in the 2020 draft. The Warriors now possessed a refreshed Stephen Curry, a nearly 100 percent Klay Thompson, and a fired-up Draymond Green. They still had their original championship core, and the supporting cast around them was getting better by the minute.

This put them in the driver’s seat for a title run in 2021. However, nothing goes according to plan, as Klay Thompson suffered yet another season-ending injury before the season even began. The Warriors were forced to play without one of their best players once again. After being eliminated from the Play-in tournament, the Warriors were unable to compete in the 2021 playoffs.

For the second year in a row, a team that was expected to win the championship in 2019 had missed the playoffs. One of their best players had already missed two seasons due to injuries. Everything seemed to be going downhill for the Warriors, but they were determined to win. After their 2020-21 season came to an end Stephen Curry told the press “You don’t wanna see us next year”. He was motivated to win.

Then the next year came, and the Warriors started the season off with a record of 18-2. A developed Jordan Poole, a solid defender in Gary Payton II, an ever-reliable Kevon Looney, and Andrew Wiggins all of these players made huge leaps in their development and were hungry to win. When they were put around as the supporting cast for Stephen Curry, great things happened.

The team was already looking very solid and then halfway through the season, Klay Thompson made a comeback. He didn’t look like his former self but he was still a very dependable player.

Klay Thompson made a comeback midway through the season, giving the squad a new lease on life. He didn’t look like himself anymore, but he was still a solid player.
The Golden State Warriors finished the regular season with a 3rd-place finish in the Western Conference. They went on to win the NBA Finals and recover their position as the best team in the league. The NBA Finals were won by a team that had missed the playoffs for two years in a row. This just goes to show how strong the Warriors’ winning mentality is, the culture at Golden State is amazing and it is good for basketball.