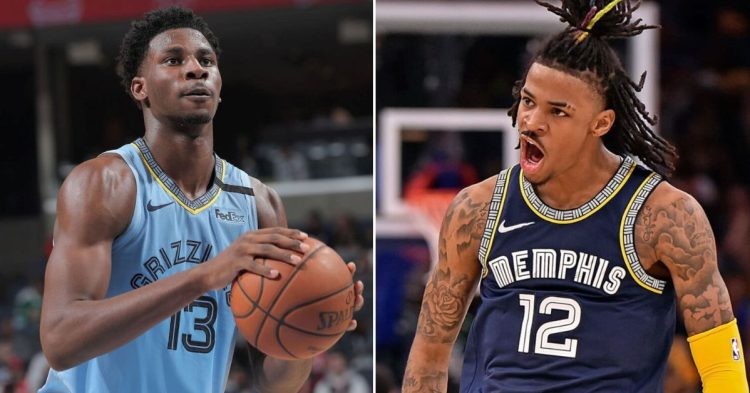 As the NBA transitions from the era of ‘Big 3s’ like KG, Paul Pierce, Ray Allen or LeBron James, Dwyane Wade, Chris Bosh into the era of dynamic duos such as LeBron and AD, James Harden and Russell Westbrook, some young duos are making a name for themselves as well. While emerging young duos like Luka Doncic and KP, Trae Young and John Collins are coming into the spotlight, Memphis Grizzlies’ Ja Morant and Jaren Jackson Jr. have gone completely under the radar.

The athleticism, creativity, and playmaking skills that Ja Morant possesses and Jaren’s ability to feed off of the ball and defensive edge makes them just about right for each other. They have already elevated the Memphis Grizzlies from 12th seed in the 2018 NBA season to 8th seed this season. While they may not be a playoff threat to the top seed this season, they have the potential to grab 5th or 6th seed among young teams like Mavericks, Pelicans, and OKC next season.

Ja Morant could be the John Stockton to Jaren Jackson Jr.’s Karl Malone

It would be blasphemous to compare Ja Morant and Jaren Jackson Jr. to NBA greats like John Stockton and Karl Malone at such an early stage in their career, however, the duo is similar in the ‘big man feeds from small guard’ way.

Ja Morant is one of the most electrifying rookie guards to enter the league in years. He is averaging close to 7 assists in his rookie season with 17.6 pts and .491 efficiency which is an impressive stat line for a rookie.  His Knee buckling quickness and the way he leaps over big men in paint using his light body and athleticism is incredible. Ja is particularly skilled at slithering into traffic and cutting to the rim. His explosive leaping doesn’t always translate in dunks but he can improve that in years to come.

He is often compared to Russell Westbrook for his athleticism but his LeBron-esque passing which has transitioned seamlessly to the league is underrated. Ja is already the primary playmaker for the Memphis Grizzlies. His body allows him the lightning-fast reaction that he displays on the court with video game-like ball handling. He camouflages passes as floaters which makes him a dangerous pick and roll passer and the teammate that benefits the most from this kind of playmaking is Jaren Jackson Jr.

Box Score is never a good reflection of a player’s defensive capabilities. He is possibly the best defensive prospect since Anthony Davis. He uses his crazy 7’3 wingspan to deflect passes with defensive instincts rare in players of his age and demonstrates remarkable awareness. Jaren’s combination of length and awareness produces jaw-dropping blocks. His ability to switch to smaller players at the perimeter effortlessly immunes him to the possibility of mismatch hunting we see in today’s game.

What sets him apart from players in the same position is his ability to shoot. He can make so many different kinds of 3s, it enables the Grizzlies to deploy him from any spot on the court. He can feed on a classic pick and roll action or shoot in transition to name a few. He averaged 16.9 points per game this season with occasional 30+ point games. JJJ is exceptional at shooting for a big man and only 11 players are ahead of him in 3P% in the league with as many attempts per game. Relative to his position, he is projecting towards being a capable shot creator.

However, he seems to not have his body under control. He fouls like the X button is stuck on his controller. Jaren commits close to 5 fouls per 75 possessions. But he has turned the corner and limited the number of fouls this season. In addition, the perimeter presence affects his rebounding rates. He lacks the numbers a forward/center should have in rebounds per game.

Ja Morant and Jaren Jackson Jr. are the perfect big man small guard duo with a selfless playmaker. They can cause serious damage next season if the Grizzlies make perfect offseason moves.

What would the ideal offseason move be for Memphis Grizzlies?

Memphis Grizzlies’ playoff stint has been rocky over the years. This small market team has never had a franchise player or a superstar. Their playoff experience is limited with such a young core. They have the bench and the role players, however, they need someone with playoff experience. In addition, they need someone to elevate their offense as their defense is in good hands.

This offseason the perfect signing for a small market team like Memphis Grizzlies would be DeMar DeRozan. His value has definitely taken a hit since he left Toronto Raptors. San Antonio Spurs will go into rebuilding mode after this season so they won’t be keen on signing DeMar Derozan again. He would be the correct fit for Memphis with his lethal mid-range offense and years of playoff experience.

Another role player that they could go for is Montrezl Harrell. This sixth man of the year is a defensive beast and can put up numbers at good efficiency. If Memphis succeeds in making these offseason moves, they could easily compete for higher seeds in the western conference with Ja Morant and Jaren Jackson as their go-to players.

BREAKING: UFC 256 Title Fight is Off!