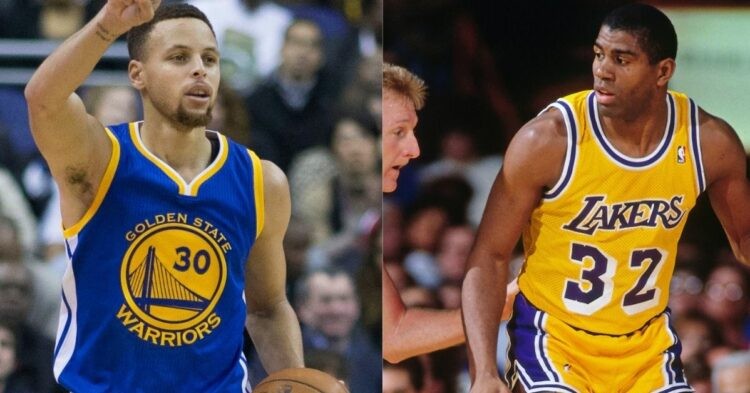 Stephen Curry and the Golden State Warriors are on the brink of a finals appearance. The 2022 Warriors have stepped up and exceeded expectations. Jordan Poole, Andrew Wiggins, and the other new Warriors seem to fit well. However, the core of GSW remains the same.

Curry has been the face of the Warriors for more than a decade now. He has proved to be a revolutionary player in talent and playstyle. The “basketball heads” of the old have other guards listed ahead of curry. Will they be forced to change their minds if he wins the title this year?.

Curry and Thompson have been acknowledged as “the greatest backcourt” we have ever seen. This is because of their unreal shooting prowess. Therefore, Curry altered the definition of a point guard. Curry has averaged shooting 47% from the field and 42% from the three-point line his entire career.

A typical point guard is, usually, the smallest player on the team. He facilitates the team’s offense and is in charge of handling the ball for the longest duration. Notable guards of the past such as Magic Johnson, John Stockton, and Allen Iveson fit this general description. However, Curry does not.

The only reason Curry is considered a point guard is due to the fact that he is the shortest player on the Warriors. The Golden State Warriors run a fluid ball movement offense. Therefore, Curry spends a lot more time trying to get open, as opposed to handling the ball and orchestrating the offense himself.

That responsibility falls on Draymond Green. He is the primary ball-handler and conductor of the offense. It is his job to play at the “top of the key” where the NBA offense is usually initiated. This also makes sense from a team perspective as Draymond is an above-average passer and below-average shooter.

Therefore, we should ask ourselves who is the true point guard of the Warriors. However, one can argue that Steph could be the best player at his size. By comparing him to the position of ball-handler and facilitator, he can be put on the same field as Magic Johnson and Ben Simmons.

This is why it will be difficult to call him the best point guard. However, since he is the best shooter in the NBA, he might just stand his own against these players. At least on offense. But it is unfair to limit Curry to a position that specializes in passing. This is because shooting is clearly his forte.