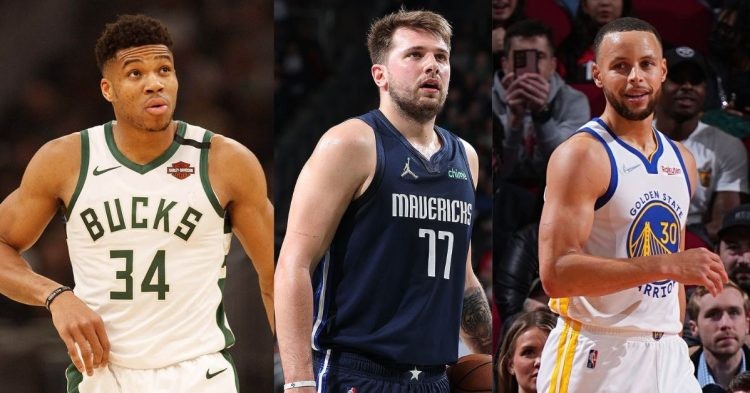 The 2022-23 NBA season has kicked off and teams are already fighting till the end for the win. The defending champions, Golden State Warriors, started on a high note against the LA Lakers. However, they could not replicate that in the next game against the Denver Nuggets.

However, despite his dominant performances on the court, he has plenty of competition from world-class players. Let’s take a look at who might be the next MVP winner.

As we all Luka Doncic is one of the best players in the league. At just 23 years old, he has made a name for himself as one of the NBA’s finest in the current generation. In the 2021-22 NBA season, Luka averaged 28.4 points, 9.1 rebounds, and 8.7 assists in 65 games. He has truly become a player who can help his team, the Dallas Mavericks, fight for the NBA title.

The Slovenian hasn’t been the only one to back him to emerge as the winner. His head coach and former NBA player, Jason Kidd, has also shown his support for Luka’s chances of winning. He said, “He’s going to be in the MVP conversation, and I think he will be in that conversation the whole year this year.”

Luka could only manage to lead the Mavericks to the Conference Finals this year. Unfortunately for him, the Golden State Warriors took the win after 5 games. It was the end of the playoffs journey for the Mavs. However, if Luka can perform like he did this year and help his team go further, he has the biggest chance of winning the 2022-23 NBA MVP. If he does win it next year, he will become one of the youngest to do so at 24 years old.

Will Giannis Antetokounmpo win the MVP award for the 3rd time in his career?

Apart from being a great scorer, Giannis has also proven himself to be a great defender. In addition to that, the 27-year-old is also severely underrated when it comes to making plays for his teammates. He has also revealed in the past that it was his “number 1 talent.” If he keeps up his form and manages to help the Milwaukee Bucks to a good finish, Giannis is certainly a strong candidate.

It is quite evident to the world that Stephen Curry is arguably the best player in the NBA right now. There were many moments in the 2021-22 season when he single-handedly beat opposition teams. In addition to that, Curry played a pivotal role in the Warriors winning their 7th NBA championship.

Last season, Steph averaged 25.5 points, 6.3 assists, and 5.2 rebounds in 64 games for the Warriors. He also brought home his first Finals MVP trophy. Even though many might claim that there are stronger contenders for the award, Steph is surely in the conversation, considering the form he is in currently.

He may be 34 years old, but Curry hasn’t shown any sign of slowing down on the court. The American has started well so far in the NBA season as he made 33 points against the Lakers and 34 against the Nuggets. He has two MVP awards to his name, (2015 & 2016) and will be looking to win his third. If he can replicate his form from last season, Steph surely has a good chance of winning the 2022-23 NBA MVP award.
Tags: Giannis AntetokounmpoLuka DoncicNBAStephen Curry
Previous Post