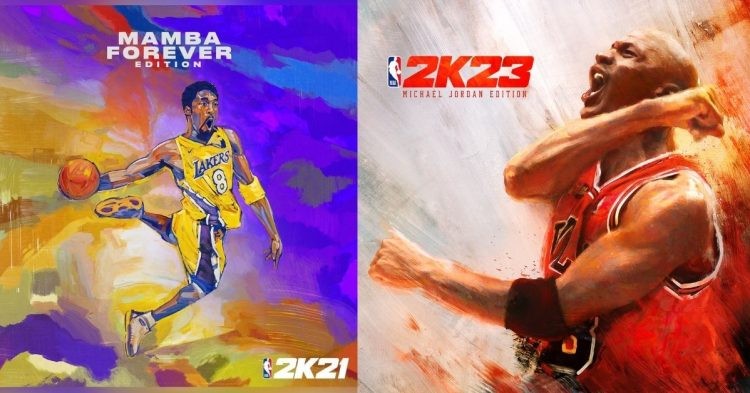 The moment that 2K fans have been waiting for a year has finally arrived. The details for NBA 2K23 were announced a couple of days ago, together with the cover athletes. The game will have two editions; the standard and the Michael Jordan edition. Devin Booker and the one and only Michael Jordan will be the cover stars of these editions respectively.

Be Legendary in #NBA2K23

The game has had 23 different versions till now. 2K usually announces the cover athletes a month or so before the release.

The game’s announcement brings something to my mind: who were the cover stars over the years? The NBA icon Allen Iverson boasts the most appearances(5) on the covers of the 2K games, with Michael Jordan and Kobe Bryant coming in second and third. Both of them have been the cover of the game 4 and 3 times respectively. Let’s have a look at the best 2K cover athletes and their overall ratings.

Who were the best cover athletes in the history of NBA 2K games?

The best cover athlete in my opinion would be Kobe Bryant. Every fan loved it when they heard Kobe was going to be on a 2K cover once again. It made it more special after his passing as it meant his memory would continue to live on.

Kobe Bryant selected for the cover of NBA 2K21 Mamba Edition in both current and next gen.https://t.co/u1itPpSCbo pic.twitter.com/qAtbursK7e

It was truly a tribute to the Lakers legend, who passed away tragically in a helicopter accident with his daughter Gianna. The name of the edition did justice to Kobe’s legacy as everyone believes Mamba lives on forever. The cover for the older consoles had Kobe in his number 8 jersey, and the next-gen consoles had the late legend wearing number 24.

In the second place, will be Michael Jordan’s 2K23 cover. This was the first time a player had an edition of the game named after him. It speaks at length about the journey MJ has had, as he made himself to be known as the GOAT. Although his numbers are quite unbeatable, if anyone manages to do it, it is highly unlikely that they will have the same impact that Jordan had. Even then, haters still question why he gets his edition of the game.

LeBron James makes it into third place with his 2K19 Legend’s Edition cover. The Lakers star appeared on the cover of the game’s 20th edition. His cover included the nicknames fans and other players had for him. The words, “King”, “GOAT” and “Chosen One” were visibly bigger than the others. These words speak the truth about the all-time great as he is the only player on par with Michael Jordan.