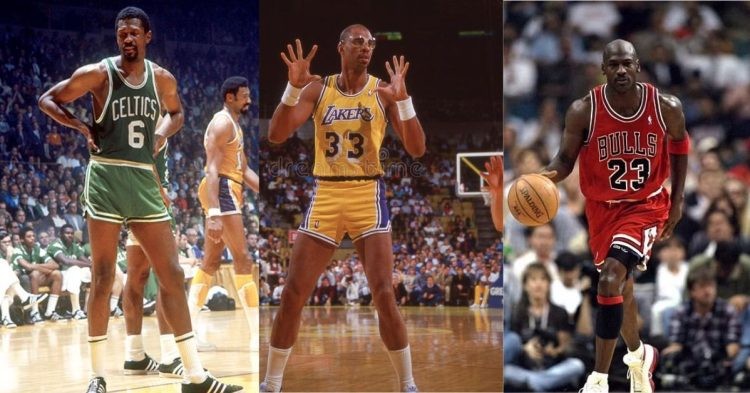 Having an NBA jersey retired by a franchise is a rare honor few NBA players are bestowed. It is a sign of gratefulness and a symbolic gesture from the team’s side. Not many people know that the late Bill Russell has a hand up on every other player in this domain.

His jersey #6 has been hung in the rafters and retired by every single team in the league. We all know about the life of Mr. Russell. Yet, despite all his accolades, one must wonder why he deserves this honor over every other NBA great. After all, the NBA Finals MVP is named after him, a rare honor in itself.

Kareem is without a doubt one of the greatest NBA players ever. He won his first title with the Milwaukee Bucks back in the 1971 NBA Finals. Jabbar won 5 more championships with Magic Johnson and the “showtime” Los Angeles Lakers.

Jabbar currently holds the record for most points scored ever. Therefore, this gives him just as much importance as far as NBA legends are concerned. In these kinds of situations, all we need to do is look at the statistics.

There is no arguing that both these NBA legends have produced goliath-like stat lines throughout their careers. He may have not won as many titles, but most NBA critics consider Kareem to have been a better player than Russell.

Whenever we discuss NBA legends and who deserves what type of respect, it is important to keep Michael Jordan at the top of this debate. Throughout the several eras of the NBA, he is considered by the majority of fans as the greatest player of all time. It would make the most sense for NBA franchises to show their respect to “Black Jesus” as he was nicknamed by his fellow players.

It is easy to discuss why Jordan deserves the same amount of recognition. However, it is more crucial to understand why Mr. Russell was given this honor. It is not because of the player he was on the court. Rather, it was because of the man he was off the court.

The 11x NBA champion was one of the pioneers of rights for players during the early years in the league. Many young fans will be unaware of the discrimination and mistreatment of African American athletes in those times. Bill fought back against the system and is a huge reason NBA athletes have the luxuries they do in present times.

All other NBA greats could claim that they are better players than the Celtics legend. They would certainly be right to some extent. Nonetheless, Russell has been given this honor for his accomplishments as a player, coach, and activist. That even led him to be given “The Presidential Medal of Freedom” in 2011.

It is a nice sight to see franchises and even entire leagues reward players for their effort and service throughout their lives. In the NBA,  Bill Russell caused the most change and helped the league grow during its early years. That is why his jersey alone has been retired by the entire NBA.