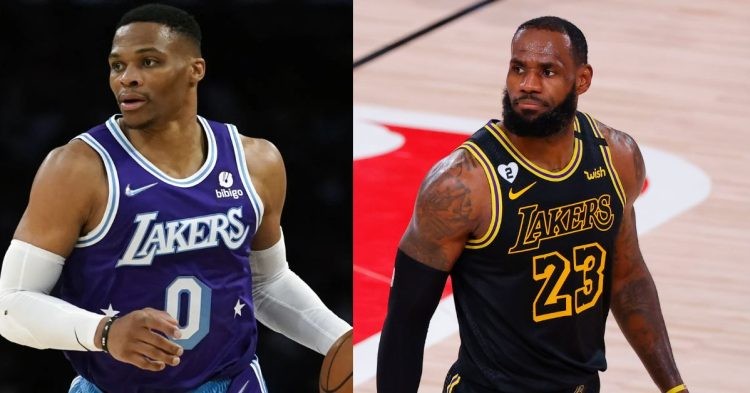 A year ago, Russell Westbrook decided to leave the Washington Wizards and take his skills to the LA Lakers. This was done with the intention of winning an NBA title. He would be paired with LeBron James and Anthony Davis. Many considered them to be the best teammates he has played with. However, they fell well below expectations this season and missed the playoffs.

The Lakers are considered a great basketball dynasty. Additionally, they had a 10x NBA finals veteran in LeBron James. Therefore, falling short despite having a star-filled roster was quite embarrassing. There have been several reports of a potential trade. Be that as it may, Westbrook has shown absolutely no sign of leaving the Lakers. One must wonder why he still wants to play there after all he has been through this season.

Russ spent the prime of his career with the Oklahoma City Thunder. This was because the franchise adored him and what he brought to the team. Additionally, he became the sole superstar for his team after Kevin Durant left. His play is based on superior athleticism and otherworldly agility. Despite this, one could argue that the Lakers are the best team he has played with so far.

Russ has never won an NBA title. In fact, the only time in his career he even made the NBA Finals was in 2012. However, they failed to win then as they were eliminated by LeBron James and the Miami Heat.

Russ was soon traded from the Thunder after the 2019 season for Chris Paul from the Houston Rockets. This allowed him to pair up with his old teammate James Harden and have a chance at a title. However, the Rockets were eliminated by LeBron, AD, and the Los Angeles Lakers in the second round of the 2020 NBA Playoffs.

The same team a year later decided to trade for him and is now looking to trade him. However, due to his large contract and his current value in the league, it is unlikely a trade will actually occur.

The Lakers were coming off a disappointing first-round exit to the Phoenix Suns. That was a huge reason for them deciding to trade for Westbrook. He is also from Los Angeles. The Lakers are unlikely to give him a new contract and this might be his last chance to represent his hometown. That is another reason he is unlikely to leave.