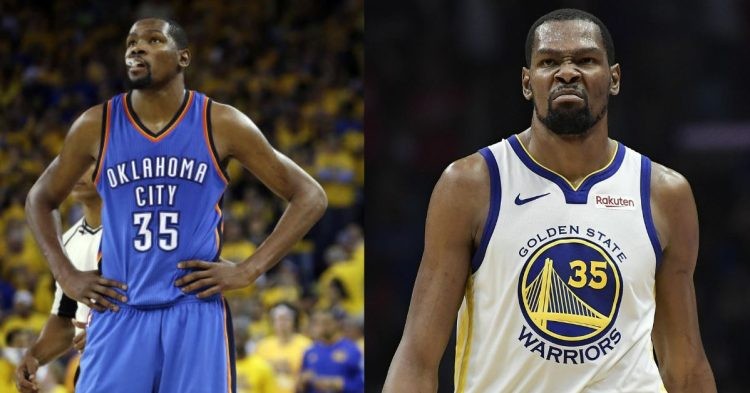 Kevin Durant is one of the most talented scorers in the NBA. He is 6’11 and has a remarkably good shooting stroke and form. Additionally, his handles and abilities at his size make KD seem superhuman. He is currently with the Brooklyn Nets and it has recently been reported that he wishes to be traded to yet another team.

There are several reasons Durant is deciding to leave the Nets. Moreover, his potential destination has the NBA media abuzz in this postseason. It is common knowledge that OKC and GSW are his former teams. One should wonder whether there are any other reasons he doesn’t want to go back to them.

Several NBA stars switch teams at some point in their careers. However, except for LeBron James, it is near impossible to remember a player who went back to his former team, let alone try to win an NBA title there. KD has made it clear that his legacy is one of the most important things to him.

It was for the same legacy that he decided to leave Russell Westbrook and the Thunder back in 2016. Since then, OKC tried to remain in contention but never made it past the first round. The franchise signed on Victor Oladipo, Carmelo Anthony, and Paul George to pair with Russ but had little success.

The Thunder descended to the bottom of the conference after Chris Paul was traded to the Phoenix Suns. At the moment, they are seen as an exciting young team that has a lot to do in order to prove itself as a contender. OKC drafted Chet Holmgren with the 2nd pick in the NBA draft 2022. He is a player with a very similar height, build, and play style to KD. That is another reason it makes no sense for Durant to go back there.

KD showing love to Chet after he wore his Nike KD 15s 🤝 pic.twitter.com/jVjix4g99t

The NBA world would be shocked if OKC made the playoffs this year due to the lack of star or veteran power in the team. Moreover, they had a 24 win and 58 loss regular season. There is no way that the back-to-back finals MVP decides to go to a team like that to build on his legacy.

The Warriors are certainly a better team to trade for Kevin Durant in comparison to the Oklahoma City Thunder. They won the 2022 NBA title by eliminating the Boston Celtics. Adding this championship to the one they won back in 2015, means KD wasn’t part of half of the Warriors’ success. One could make an argument that the Warriors could have won those 2017 and 2018 finals matchups without him.

Several sports journalists and “basketball heads” tore Durant apart for joining GSW in the first place. He left them after the 2019 season and has spent 3 years with the Brooklyn Nets. However, he has been unable to even lead them to the conference finals, let alone win an NBA title for the team.

GSW knows its championship window is still open. Trading for KD would ensure at least another title if not multiple in the near future. However, they would have to give up several assets such as draft picks and players in order to meet the price for Kevin Durant.

One must wonder whether GSW would really mortgage a decade or two of competitiveness and relevance in the league, just to try to win more right now. Additionally, both KD and Steph damaged the other’s legacy and all-time greatness by creating the Warriors dynasty. If he goes back to them, he will neither be respected nor treated as well as he was the first time around.