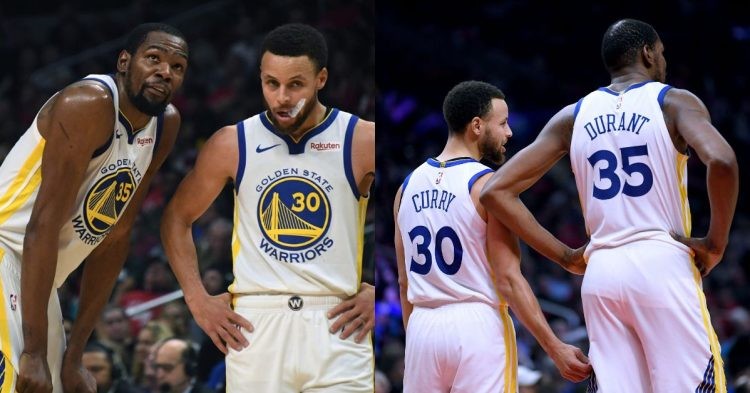 Kevin Durant has been mentioned countless times in the past few weeks. It’s probably safe to say that he is the name on everyone’s minds right now. He sent the NBA world into a frenzy after he submitted a trade request to the Brooklyn Nets. Automatically, Golden State Warriors were involved since they felt his absence clearly when KD left. Perhaps a Kevin Durant-Stephen Curry reunion is possible?

Although KD didn’t leave the Warriors on a good note, reports say that the GSW stars may be willing to welcome him back to the team. When Durant was with the Warriors, they were a team that everyone feared. Steph, Klay Thompson, and Draymond Green formed a formidable team that could demolish any team that stood in their way. That team led The Bay to two NBA Championships in a row in 2017 & 2018.

Recently, Brian Windhorst reported that Steph has what it takes to shut down the trade. However, despite that, he is not going out there and claiming that the rumors are just rumors.

“Steph Curry’s got the kind of clout where he can shut this down, but he’s not.” 👀

—@WindhorstESPN on the rumors that KD will join the Warriors pic.twitter.com/aCCFiDHSb2

If we think about it, Windhorst is in fact right. Steph isn’t someone who will hold back. The Warriors star is the best player the franchise has ever seen. There is no doubt that his contributions have been immense to the team’s success in the last few years. I’m sure he has enough power in the team to say that the move is a bad idea.

Although he is not as young as he used to be, Steph is still the best player in the world. You would’ve seen how good he still is during the 2022 NBA Finals. His extraordinary individual performances even helped him bag the Finals MVP trophy. It is clear that the GSW board would want to keep Curry happy. And if he tells them going for KD is something they shouldn’t do, I don’t think they will disagree with him.

However, I think Steph wants KD back at Golden State. With KD, the team was consistently winning games consecutively. Now, with Durant back at GSW and Klay back from injury, the team could do some serious damage next season. Adding on, the team also has talented youngsters to step in when needed. This is why Steph realized KD coming back will still be a good idea. He still wants to go for more titles with Warriors and his ambitions are sky high.