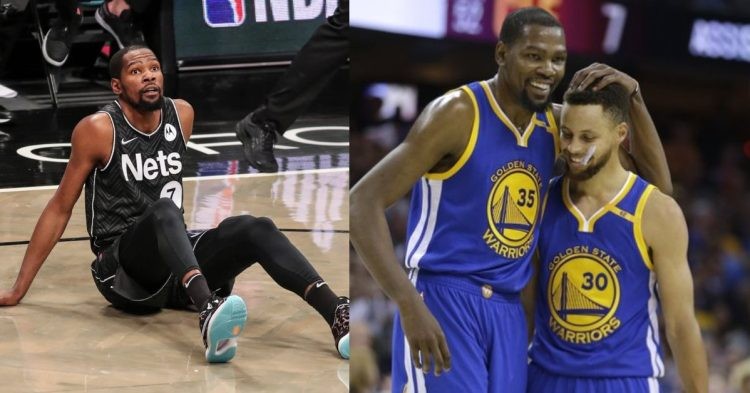 Steph Curry and the Golden State Warriors managed to win the 2022 NBA Finals. Moreover, they did so without former teammate and back-to-back Finals MVP Kevin Durant. This championship was the first they won ever since KD left them in 2019. Several analysts and fans were of the opinion and still are, that KD needed the Warriors more than they needed him.

One must wonder how much truth there is to this statement if any. Therefore, we must look back at the success and failure of the Warriors in order to clearly understand the dynamic between these two parties better. The evidence might just show that GSW needed KD just as much if not more.

Reports have emerged that Kevin Durant is unhappy with his new team the Brooklyn Nets. He has been unable to lead them out to the Eastern Conference Finals, let alone win an NBA title for the franchise. Be that as it may, the Golden State Warriors have shown some interest in reacquiring KD, even if this means trading young players and risking the future of the franchise.

.@ShannonSharpe thinks KD will return to the Warriors 👀

“If the Nets want young talent and draft picks, the only viable option is the Golden State Warriors…KD will go be an Eddie King and the Five Heartbeats…I feel like going home.” pic.twitter.com/Igcu8CBecg

The average fan must wonder why GSW would still show interest in the 2X Finals MVP. Especially considering they have now managed to win another title without him. These same fans seem to have forgotten how efficient KD’s scoring was for GSW and exactly how dominant they were with KD.

The KD-led Warriors managed to eliminate LeBron James, Kyrie Irving, and the Cleveland Cavaliers in just 5 games. Additionally, they went on to eliminate the Cavs in just 4 games the next year!. King James only fared worse and worse against them every time they met.

People are also quick to forget the immediate past. The Warriors were eliminated in the play-in tournament last year. They lost to both LeBron and the Lakers as well as Ja Morant and the Grizzlies. This means their clear-cut path to the NBA Finals and the dominance they showed there died with KD’s departure.

LeBron and the Lakers, albeit older will definitely be there next year. Additionally, the Grizzlies managed to force GSW to 6 games without Ja Morant for 2 of them. This clearly indicates that their path to the finals is not set in stone. Resigning Kevin Durant might just help the Warriors steamroll the NBA as they did so for multiple years in the past.