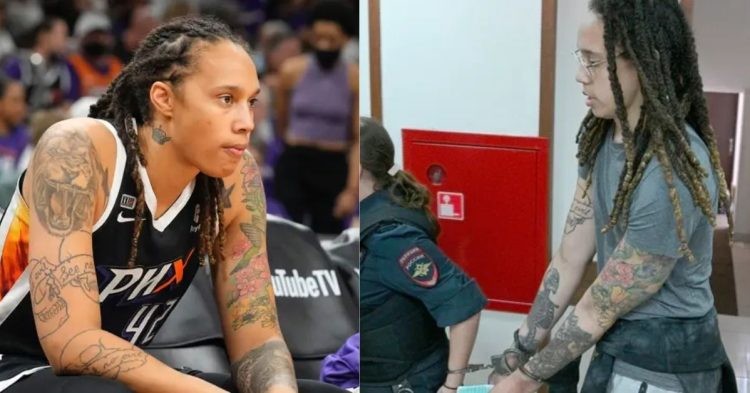 Britney Griner on the court and in cuffs (Credit- Twitter)

News spread quickly as Brittney Griner was arrested and soon jailed in Russia. She attempted to carry marijuana vape cartridges along with her luggage through airport security. This is a very severe crime in Russia as traveling with substances can also be considered intent to distribute.

It is no understatement to say that Russian laws are very strict. There is a chance she could stay in jail for up to 10 years for committing this crime. One must wonder whether the Russian government will do anything to help the WNBA superstar come back home soon

No man, or in this case woman, is above the law. It is important to note that some laws, especially international ones must be adhered to quite strictly. Ignorance is not an excuse and can be considered a sin on its own. Therefore, claiming to have “not known” is quite an invalid defense.

If a tourist went to a country where Jaywalking is a crime, and it is not in their native country. One must wonder whether they should be exempted from punishment simply because they were not well versed with the law.

To make matters worse, Griner has attempted to use whatever power she possessed to sway the Whitehouse and United States government into taking action. She wrote a letter to the President where she even subtly added that she “misses” her Olympic Jersey along with other things.

NEW: A letter from Brittney Griner was sent to the White House today, making a direct appeal to President Biden for her freedom. Representatives shared the following excerpts: pic.twitter.com/pvh4IpOfou

One must wonder what the Russian legal administrators and system would think of her defense to these claims. She is pleading guilty to the possession of drugs. However, she denies any intent and claimed that it was a mere accident that led to the cannabis vape cartridges being “accidentally” packed.

Finally, when her wife was asked about her leaving for Russia, Cherelle stated that Griner went to Russia because the WNBA did not pay her as much as the NBA or how much she would make overseas. Therefore she had “no choice” but to go.

These statements make no sense as Griner has a net worth of around 17 million dollars. Therefore, her career was never at risk. One must certainly hope that the Russian administration is not very thorough in verifying the WNBA star’s excuses and version of the story. If they do so, it is highly unlikely Brittney will be a free woman anytime soon in the upcoming years.