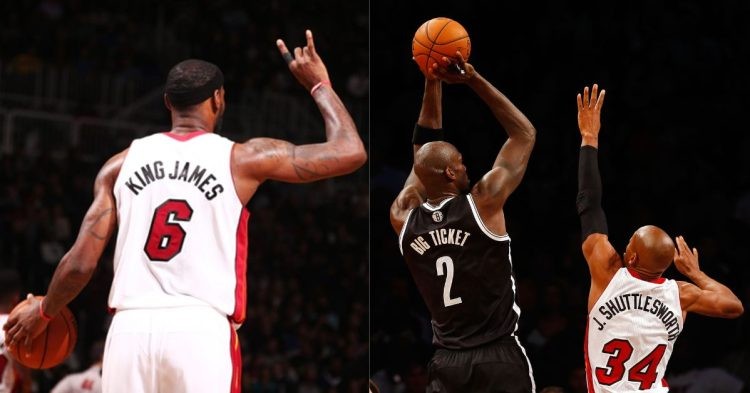 Nicknames have had a huge importance in the NBA over the years. To add to that, they have come a long way since the start. The titles of certain players have stuck with the fans well. An example of such a player would be Michael Jordan, who had multiple nicknames given to him. It included His Airness, Black Cat, and many more.

In 2014, the NBA adopted the idea of having special edition jerseys that had the nicknames of the players instead of their actual names. The Brooklyn Nets and Miami Heat debuted the nickname jerseys that day. There were several world-class players on the court that day who also caught the fans’ eyes with their unique nicknames.

Kevin Garnett wore the name “Big Ticket” on his back. Ray Allen who played for the Heat at the time, had the nickname “J.Shuttlesworth” on his jersey. The nickname is a reference to his character Jesus Shuttlesworth from the movie “He Got Game”.

Those weren’t the only players with catchy names on their backs. LeBron James had “King James” on his Heat uniform with the iconic number 6.

Should the NBA bring back the nickname jerseys? pic.twitter.com/kxv4pff87h

The jerseys with nicknames did have their haters, but fans loved it too. Fans often give nicknames to NBA players and a few will surely be stuck with the players for times to come. However, the NBA decided that was going to be the last time we see nickname jerseys.

Nicknames in the NBA are slowly fading away

There is one possible reason why the NBA chose to scrap the idea of nickname jerseys. Many players had nicknames back then, and they were well known among fans too. However, as years passed, the love that people and players had for these unique titles began to decrease. Golden State Warriors star Draymond Green gives his opinion on the popularity of nicknames falling.

On his show, DG said, “I saw Austin Reeves, who is on the Lakers, come out the other day like he’s trying to shed two nicknames. And it’s like brother, ‘you have not done enough in your career to be trying to shed nicknames that people gave you.’ I was really blown away when they said that. Brother you should take those nicknames and try to run with them.”

When Kyle Kuzma brought up the Hillbilly Kobe name that fans gave Reeves, Dray continued. He said, “you better embrace that one, are you kidding me? Any Kobe… Hillbilly Kobe? You should be running with that. By the way, if I’m him and they’re calling me hillbilly Kobe, I’m trying to be in the next White Men Can’t Jump, I’m trying to really run with that.”

Dray’s comments on Reeves trying to get rid of his nicknames are just an example. Although it is understandable why the Lakers rookie is trying to distance himself from the “AR-15” nickname, the “Hillbilly Kobe” name he got is in fact an honor. I understand he wants to pay his respects to the late Kobe Bryant, but it doesn’t get better than that when it comes to nicknames.

Should nickname jerseys be brought back?

The reason why the NBA stopped nickname jerseys is obvious; nicknames themselves are dying. Like Draymond said, players today do not pay much attention to them. Moreover, they do not realize how beneficial it could be to them if they started to run with their nicknames.

Kuzma even said, “Understanding and seeing what a brand really, so for me I took it right away like coming in it was Kuzmania… I ran with it, my first year, we made merch T-shirts for Kuzmania. I was the 27th pick, I made 1.3 or 1.4 million dollars on my rookie salary. Through merch, I made $750k off of merch”.

What if the NBA brought back the nickname jerseys? 💭 pic.twitter.com/PcnvlueWru

Kuzma’s experience with nicknames shows that players can choose to stick with their nicknames and take advantage of it. It could help them promote themselves more from a brand’s perspective. At the same time, bringing back the nickname jerseys could also do wonders for the NBA as it would also boost their jersey sales with limited edition jerseys.