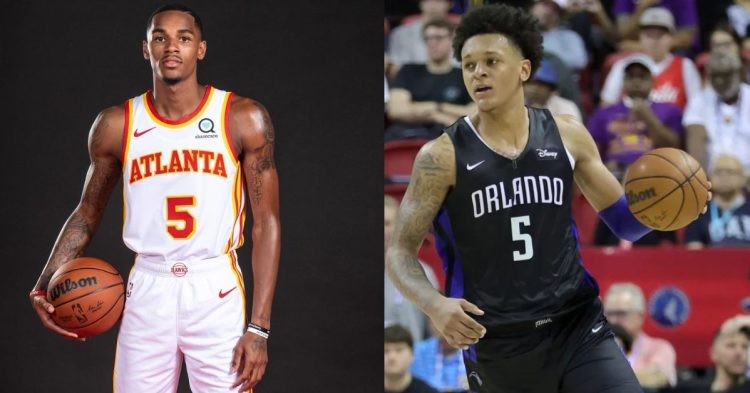 Dejounte Murray is an up-and-coming NBA star. He was traded this season to the Atlanta Hawks from the San Antonio Spurs to play alongside Trae Young in the Eastern Conference. Another team in the east with a new star is the Orlando Magic. They drafted Paolo Banchero with the #1 pick in the 2022 NBA draft.

Paolo and Dejounte faced up a few weeks ago at a pro-am tournament organized by former NBA player Isaiah Thomas. “Pro-Am” refers to a space where both professional basketball players and amateurs can compete on the same court. There seemed to be a lot of trash talk and bad blood between Murray and Banchero.

They even took their fight to social media and garnered the attention of the sports world. Now, playtime is over and the regular NBA season is less than 2 months away. Considering that both their teams are from the same conference, it is likely, that we see these two rivals’ matchup sooner than expected on October 21st.

All sports fans love the conflict their sport provides them. NBA fans did not get to see Banchero and Murray play against each other and will look forward to this matchup on October 21st. Moreover, this is not exactly an even matchup as far as the franchises are concerned.

The Atlanta Hawks are simply superior to the Orlando Magic at this point and time. Trae Young managed to carry the Hawks to the Eastern Conference Finals in 2021. On the other hand, the Magic have not made it past the first round for a long time now.

Sports fans know that the Hawks are already a playoff contender in the Eastern Conference. The addition of Dejounte to the roster makes them a force to be reckoned with this season. The Magic are simply too young and inexperienced to surpass the Hawks at this point in time.

Banchero may have his work cut out for him. The Hawks are not an easy team to beat. With or without Dejounte Murray. This beef may have personalized things greatly and Banchero will feel the need to “prove himself” when these two teams match up in a few months.