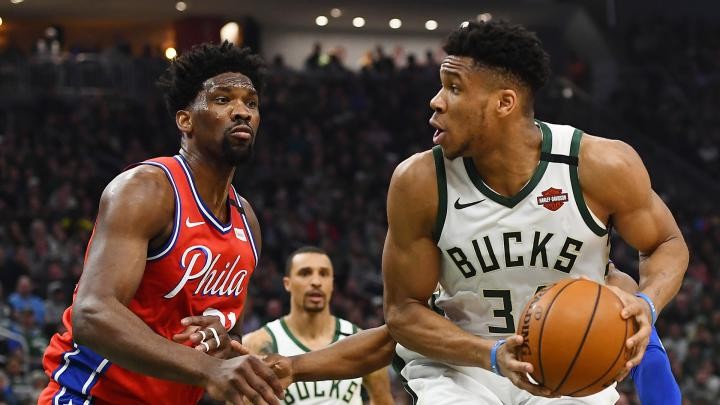 The Philadelphia 76ers and the Milwaukee Bucks are 4th and 3rd in the Eastern Conference standings, respectively. But virtually nothing separates them as they share equal records of 46 wins and 28 losses each. And have also split the victories one apiece in their season series. Therefore, their meeting at the Wells Fargo Center Philadelphia is a key matchup for both of them.

The clash also pits 2 MVP frontrunners, Joel Embiid, and Giannis Antetokounmpo against each other.

The two MVP contenders put on a show as they traded point for point and rebound for a rebound. Giannis Antetokounmpo scored 32 points, collected 11 rebounds, and had 9 assists. Jrue Holiday added another 24 points to the score to go with his 5 rebounds.


But it was Joel Embiid who had the upper hand and the 123-120 win against the Bucks. Embiid scored 42 points, 14 rebounds, and 5 assists. He was helped by 19-point efforts from Tobias Harris and Tyrese Maxey as well, as the Sixers equaled the season series 1-1.

Both the Sixers and the Bucks are only half a game behind the Eastern Conference top seeds, Boston Celtics and Miami Heat. And the 4-way contest for the top seed will continue in this matchup, as both teams look to put one past the other and climb the rankings.

Although both teams have similar records in their previous games, the Bucks are thinner on personnel. And the Sixers have found a fresher approach with the duo of James Harden and Joel Embiid firing on all cylinders. Which is reason enough to predict that the Sixers will just pip the Bucks to the win and pull slightly ahead in the seeding race.

How to watch the Philadelphia 76ers vs Milwaukee Bucks?

You can watch the Philadelphia 76ers vs Milwaukee Bucks on NBC Sports Philadelphia. And for fans across the world, the game can be streamed through NBA League Pass. For play-by-play commentary, you can tune into 97.5 The Fanatic on the radio.