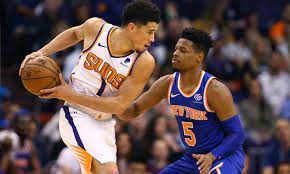 The Phoenix Suns, currently 2nd in the Western Conference, will travel to Madison Square Garden for their match-up against the Knicks. New York has a 10-8 record and is in 7th position in the competitive Eastern Conference.

The Phoenix Suns, this season have a much better lineup than the previous season. Chris Paul and Ayton have been retained, and the addition of JaVale McGee has provided them with depth in the squad. Paul is all NBA leader in assists while Devon Booker is leading in points per game for the team.

2018 1st pick Deandre Ayton has shown steady growth with the Suns as he now has a great playmaker in Chris Paul with him. Devon Booker has performed well and is still the Suns’ main player.

New York Knicks fans will be pleased with the team’s performances so far. Julius Randell has been in dazzling form since joining the Knicks. He leads the team in points (20.4), assists (5.1), and rebounds (10.3) per game. The experience of Derrick Rose and Kemba Walker has been very important for the team. Rose has some great productions on-court, carrying the team through tough situations.

Coach Tom Thibodeau will be looking for more efforts from RJ Barret and Evan Fournier as sometimes the Knicks’ offence becomes predictable. The addition of Rose and Walker has given some options to the Knicks coach, but their shooting efficiency is just above 40%.

The Phoenix Suns are on maybe the greatest run since their NBA Finals performance the previous season. The Suns have won 14 in a row, beating some of their opponents in the process. The Knicks have no such big stretch run but have managed to come up big when their playoff spot is in doubt.

The Suns’ depth might be a big challenge for the contender teams this season and might prove too strong for the Knicks in the upcoming fixture also. Phoenix will win and extend their run to 15-0.

How to watch Phoenix Suns vs New York Knicks?

The Phoenix Suns vs New York Knicks match will take place at Madison Square Garden. The stadium is prepared to accept fans at full capacity. International viewers can access the game on NBA League Pass. NBC Sports Chicago will be the local broadcaster for the Bulls.