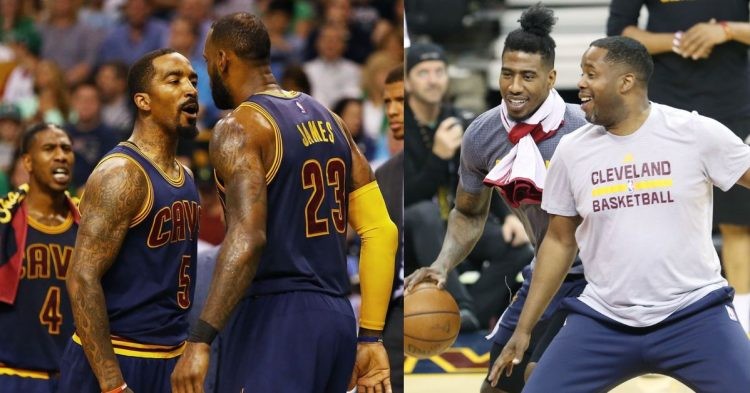 LeBron James has been in the NBA for two decades now. Avid fans will remember his time with the Cleveland Cavaliers could be considered the greatest stage in his career. That is because he managed to come back from being down 3-1 to Stephen Curry and the Golden State Warriors to win the 2016 NBA Finals. Moreover, King James managed to carry the Cavs to the Finals for 4 years in a row.

In the 2017-2018 season, there was an incident in the Cavs locker room where conflict was created between JR Smith towards the assistant coach at the time, Damon Jones. One should wonder what happened.

This is quite an embarrassing situation for both sides involved. JR was an invaluable member of LeBron’s squad during his days with the Cleveland Cavaliers. Moreover, he was even part of the Los Angeles Lakers team that won the 2020 NBA title.

It seems there is a reason for the league to take a harsh and critical stand against Smith over the years. Damon Jones was recently interviewed many years after the incident when he finally felt free to discuss what happened.

JR Smith threw hot soup at a coach, we just didn’t get footage of it. He was only suspended one game. https://t.co/nKCMjzCiPP

According to Jones, JR Smith was enraged at him and flung hot soup in his direction, simply because he did not share the joking mood and took offense to something that Damon said back then. Regardless of what was said, it is simply wrong and very unprofessional for an NBA player to engage in such childish and hurtful behavior. Jones revealed details about the incident at his own discretion.

“For a long time, I refused to talk about the soup incident. It’s okay now, we have moved on. He apologized for it. It was the bowl plus the soup. And it was the first bowl out of the pot, so it was hot as hell. I was standing and it went on my shoulder, arm everywhere.”

It couldn’t have been easy for Damon Jones to reveal this information that embarrassed him even after all these years. To those interested, JR was even suspended by the NBA for his actions. He has not repeated anything similar since then.
Tags: Cleveland CavaliersJR SmithLeBron JamesNBA
Previous Post