Who Is Tyrese Haliburton – College Record, NBA Team, and All You Need to Know About the Indiana Pacers’ Latest Addition 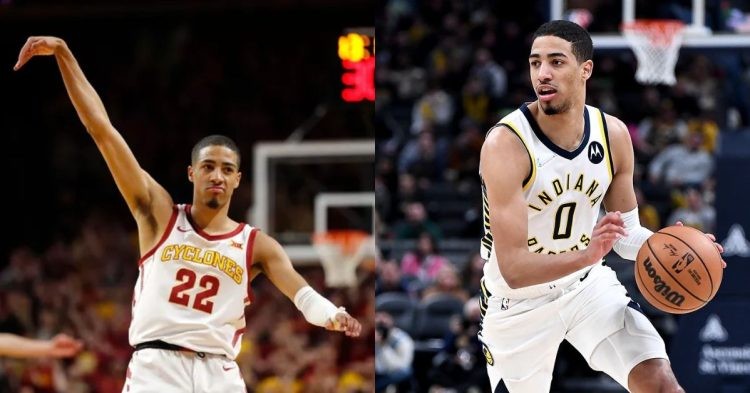 The Indiana Pacers have gotten off to a decent start in the 2022-23 NBA season. They sit in 6th place in the Eastern Conference standings, with a .500 win percentage so far after 12 games played. Their standout player so far has been Tyrese Haliburton.

Not many are familiar with Tyrese‘s history as a professional basketball player. He played for Iowa State University, the Iowa State Cyclones. In his college career, Haliburton averaged 6.8 points, 3.6 assists, and 3.4 rebounds in the 2018-19 season. The following year, he put up 15.2 points, 6.5 assists, and 5.9 rebounds. It was a perfect time for the player to declare for the NBA Draft, which Tyrese did in 2020.

The Sacramento Kings drafted Haliburton as the 12th pick in Round 1 of the 2020 NBA Draft. He went to make his debut against the Denver Nuggets a few weeks later and put up 12 points, 4 assists, and 2 rebounds on the board in his first outing.

In his rookie season, Tyrese finished 3rd in the Rookie Of The Year standings and the NBA included him in the NBA All-Rookie First Team. He could have managed a better end to the season if it wasn’t for the knee injury he suffered against the Dallas Mavericks that year. Tyrese went on to play for the Kings till 2022. He featured in 109 games for them, averaging 13.6 points, 6.3 assists, and 3.4 rebounds.

The Kings then traded Haliburton to the Indiana Pacers this year. He was part of the deal that included Tristan Thompson and Buddy Hield. The Kings received Jeremy Lamb, Domantas Sabonis, and Justin Holiday.

How has Tyrese Haliburton helped the Indiana Pacers this season?

As mentioned before, the Indiana Pacers have been having quite a decent season so far. Tyrese leads the rest of the Pacers team in points scored and assists made per game at this stage of the NBA season. So far, the 22-year-old has played 12 games this season. According to statmuse, he has averaged 20.5 points, 10.3 assists and 4.8 rebounds.

he’s now leading the league at 10.3 assists per game.🔥 pic.twitter.com/hQHUtKg9rK

Apart from the fact that he is putting up ridiculous numbers in terms of scoring, Tyrese is also extremely pinpoint when it comes to passes as well. The American always looks to find his teammates in open areas. When opposition defenses close up the path to the rim for Tyrese, he manages to find a pass to his teammates out of nowhere.

Since joining the Pacers this year, Haliburton has made a name for himself as a dangerous guard, with additional playmaking talents as well. A while ago, he mentioned that he was angry with the whole world and the entire Kings franchise for trading him.

Tyrese Haliburton breaks down his original frustrations of getting traded by the Kings last year.@Pacers | #PacersTwitter pic.twitter.com/N1OLmDhMMl

However, Tyrese believes that the trade was one of the greatest things to happen to him since he gets the opportunity to show that he has the potential to be one of the best guards in the NBA at the Indiana Pacers.