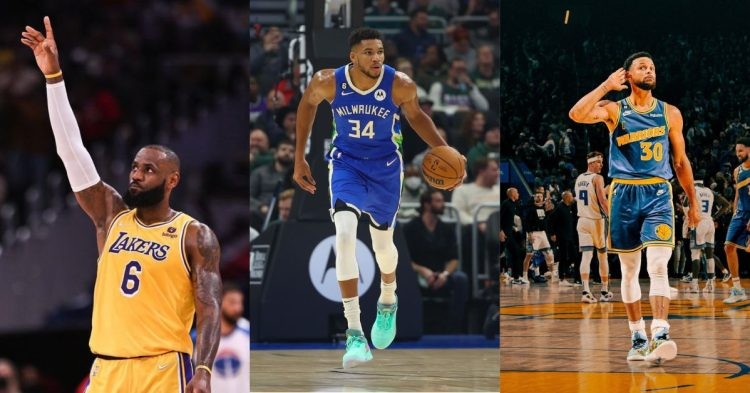 LeBron James of the Los Angeles Lakers, Giannis Of the Bucks, and Stephen Curry of the Warriors. (Picture Credit- Twitter)

The 2022-2023 NBA season has been off to a great start so far. There have been plenty of surprises this season. Teams that were projected to be lottery teams like the Jazz have been beating everyone. The Warriors who are the reigning NBA Champions have yet to win a game on the road. The Bucks are as strong as they were projected to be and currently hold the 1st seed in the East. The Cavs who were thought to be dead actually hold the 4th seed in the East.

This Jazz team is built better for the playoffs than last year’s team.

They defend the perimeter and contest shots at the rim.

I feel crazy saying this but this team could make noise in the postseason.

A lot of teams have been showing out this season and come playoff time the league will probably be blown wide open. Though there are some teams that might have some trouble and make an early exit from the playoffs. One team, in particular, is the Utah Jazz. Even though they’re playing some of the best basketball of their careers, their lack of playoff experience might be a shortcoming for them.

Other teams like The Cavaliers and the Spurs might also face the same troubles if they manage to make the playoffs. The Warriors on the other hand are an amazing team and will surely turn things around come playoff time. But, if they don’t fix their bench situation it might all be for naught. There’s another team that hasn’t looked too hot in a while. The Lakers currently hold the 14th seed in the West. Here’s what we can expect from them this season.

Will Los Angeles Lakers miss the NBA Playoffs the second time in a row?

The Lakers have had a terrible start to the season. Putting Russell Westbrook on the bench did some amount of good for the team. But there is only so much that an aging LeBron can do since Anthony Davis hasn’t looked like himself in a while. On top of that, the Lakers bench isn’t good enough to go up against most teams who are projected to make the playoffs.

All of this is considering that the Los Angeles Lakers even make the Playoffs. If things don’t change for them there is a very strong chance that they might not. The Lakers need more players who can score off the bench. They also need players who can shoot it from beyond the arc. Without these 2 the Lakers are gonna have a hard time this season as well.