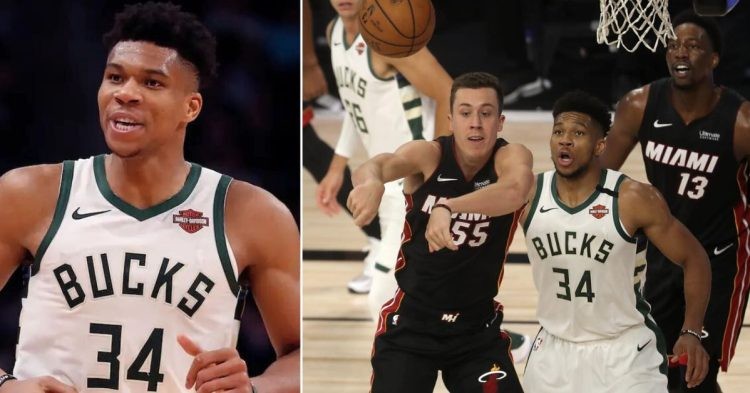 In yet another top seed disappointment after Boston Celtics take 2-0 lead, Miami Heat defeats Milwaukee Bucks  116-114. Miami had Milwaukee second-guessing themselves on both ends of the floor tonight. After a surprising come back in the final minutes of 4th QT Bucks tied the game, however, Giannis Antetokounmpo fouled Jimmy Butler at the buzzer and the game slipped from their hands.

Although Milwaukee Bucks outrebounded Miami Heat due to their height advantage, they lost the game in every other aspect including defense. Boasting 2019-20 defensive player of the year, Milwaukee had just 6 steals and 2 blocks, on the other hand, Mimi had 12 steals and 4 blocks to take the 2-0 lead in Game 2. Milwaukee had their offense revolving around Giannis while 7 players from the Heat scored in double digits.

Jimmy Butler went strangely passive in Game 2 with just 13 points at 37.5 FG% but he was the primary facilitator with 6 assists. Reigning MVP Giannis Antetokounmpo recorded a double-double with 29 points and 13 rebounds at 55.6 FG but in vain. The officiating was largely in Milwaukee’s favor as Middleton shot 3 FTs with 4.3 seconds left, however, the foul call on Goran Dragic was questionable.

The game got intense with 43.9 seconds left when Giannis missed clutch free throws but drove to the rim in the next possession followed by Brook Lopez’s layup. The score was 114-111 when Khris Middleton was fouled in the act of shooting. He drilled 3 FTs and tied the game, rest is history.

Also Read: Denver Nuggets or Utah Jazz: Which Team Has a Better Chance of Defeating the LA Clippers?

Announcing awards right before playoffs has always been a downside for players as fans continue comparisons. While it’s true that DOPY is a regular-season award, one would expect Giannis to take his defense up a notch in the playoffs. It has not been the case so far in the second round against Miami Heat.

Giannis Antetokounmpo made two defensive blunders in this series. He didn’t guard Jimmy Butler in Game 1 which lead to a blowout victory for Miami Heat. In addition, Butler scored 40 points in the game and was more or less single handedly responsible for Bucks’ loss. When asked about it in the postgame press conference Giannis said,

“To guard him? No i didn’t. Why would you ask that? I’ll do whatever coach wants me to do”

Anthony Davis looking at Giannis in the cafeteria after fouling Butler but was named DPOY pic.twitter.com/USp7TM2duy

In game 2 he fouled Jimmy at the buzzer and lost the game as Butler drilled free throws. Giannis went out of control while contesting the shot and his hand landed on Jimmy’s waist. Certainly, better judgment is expected from 2019-20 Defensive Player of the Year who is also in the run for MVP award this season.

“IS THIS YOUR DPOY?!?!” pic.twitter.com/joXDT5L9hx

Miami Heat has been undefeated so far in the playoffs, sweeping Indiana Pacers in the first round and 2-0 lead over Milwaukee Bucks in the second round. An emerging star for Miami Heat in the postseason has been Goran Dragic averaging 23.6 points per game.

“He’s a Quitter” – Tyron Woodley Rains Down On Colby Covington