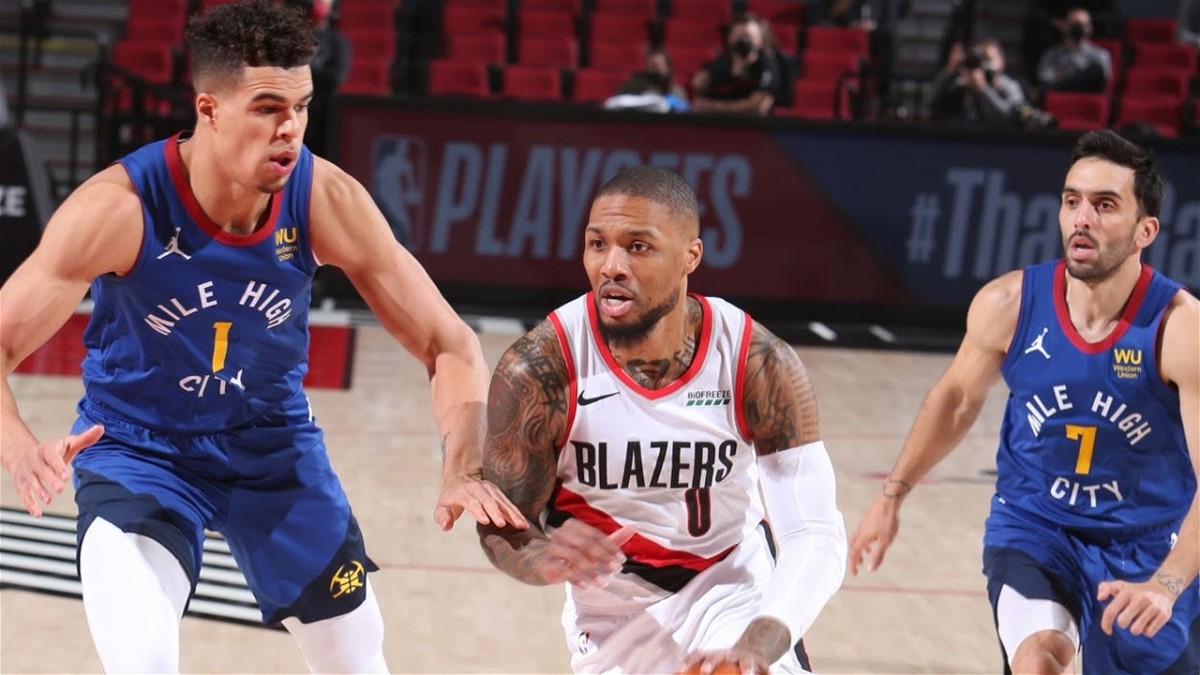 While NBA chose to televise LA Lakers getting blown out by Phoenix Suns in Game 5, Damian Lillard set the record for most 3-pointers in a playoff game on NBA TV. Lillard was absolutely unbelievable tonight and carried the Portland Trailblazers on his back for 52 minutes straight.

Although Denver Nuggets won Game 5 147-140, the game saw a lot of ups and downs and arguably the greatest clutch performance. The matchup between Denver Nuggets and Portland Trail Blazers is the most exciting and balanced one in the western conference. It is impossible to predict which team will move to the second round of playoffs however, this series is definitely going to Game 7.

Damian Lillard has a monstrous night to himself with 55 points, 10 assists, 6 rebounds on 70.8% from the field. In addition, he had 3 blocks which is unheard of for a 6’2 guard. He took the single-game 3s record away from Klay Thompson and now sits on top with 12 made 3s. And what is even more impressive about it is he shot 12-17 from the arc, two of which sent the Trail Blazers to double OT.

But a game like this wasn’t enough for Blazers to take a 3-2 lead ahead of Game 6 at home. Entire roaster sold Dame tonight with pathetic shooting. CJ McCollum went 9-22, Normal Powell shot 5 for 14 and Carmelo Anthony had an off night shooting 3 for 11. Damian Lillard was single-handedly carrying the team and only had 1 turnover while Jusuf Nurkic turnovers and 6 personal fouls. If the Blazers plan on coming back they have to do much better than this in Game 6 at home.

Nikola Jokic proves once again that he is the MVP

The momentum with which Denver entered the game was unbelievable. They did not let the sloppy Game 4 loss faze them early in Game 5. They had a 10-0 run to start the quarter and Nikola Jokic converted each shot. But Portland Trail Blazers made a comeback soon enough in the second quarter and outscored the Nuggets 37-27 with an incredible 20 point turn around.

Blazers ended up taking a large lead in the second half of the game, however, Nikola Jokic reminded them that the MVP front runner is still on the court. He concluded the night with 38 points, 11 rebounds, and 9 assists, one short of an assist from a triple-double. But he struggled in the fourth and missed a couple of clutch shots which gave Blazers a chance to tie the game.

Great cut by Aaron Gordon to set up a basketball pornographic pass by Nikola Jokic. https://t.co/QWoYIfOXir

Michael Porter Jr. bounced back from an off night with 26 points and 12 rebounds and shot the clutch 3 in second over-time from an insane pass by Nikola Jokic. This 3 ensured the win for Denver tonight. Even though Nuggets are short-handed with their second option Jamal Murray sidelined, they are not backing down and are legitimate contenders for the title this season.