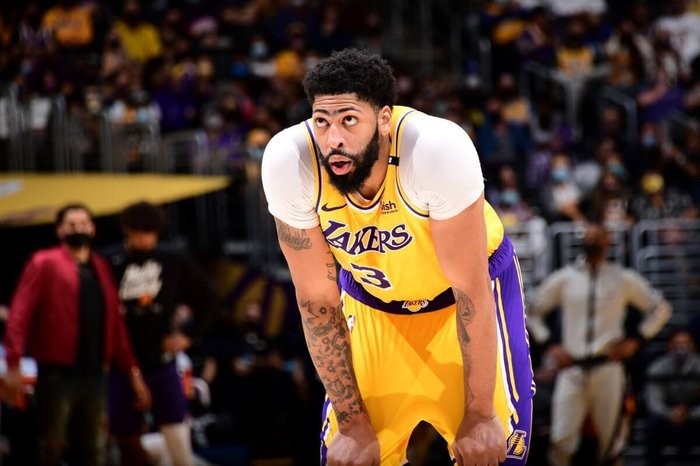 During game 4 of the first round between the Lakers and Suns, one of the key players on the LA’s roster, Anthony Davis suffered a strain in his left groin. He left the game early in the first half with only 6 points and 4 rebounds. LA Lakers certainly felt their big man’s absence in the game as they proceeded to lose to the Phoenix Suns.

Suns were in a single-point deficit entering the second quarter and took full advantage of Anthony Davis’ early exit to bounce back and take a commanding lead in the first half itself. They shared the offensive load as six players on the Suns’ roster had double digits in scoring while LA’s starters suffered miserably.

The injury to the groin occurred late in the first half. Anthony Davis was pulling up for a layup when he was seen falling to the ground holding his leg. The star, however, continued to complete that quarter and at halftime, he was seen going back into the locker room but never came back to the game after that. Anthony Davis was also suffering from a hyperextended right knee from Game 3.

The Laker’s coach, Frank Vogel mentioned to the reporters, “He’s undergoing further medical evaluation and we’ll have more information tomorrow; He was saying that his knee was sore, but that there was no way he was not going to play, I thought he gave a heck of a run at it trying to compete through pain.”

According to Shams Charania, Anthony Davis is highly unlikely to play game 5 of the first-round NBA playoffs.

Lakers star Anthony Davis is unlikely to play in Game 5 vs. Suns on Tuesday due to strained groin, sources tell @TheAthletic @Stadium. There’s optimism about Davis‘ status as series continues and as he is evaluated day-to-day.

This might be a huge blow for the LA Lakers in their chase for another ring. We’ll have to wait till game time to see if Anthony Davis steps on the court for game 5.