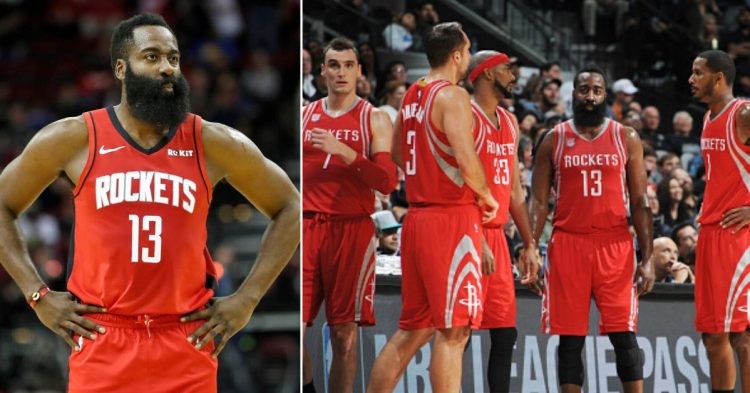 “Offensively I played like S**t….. But my teammates gave me confidence throughout the course of the game” – James Harden on his Game 7 performance.

James Harden came up with a clutch defensive play in crunch time to send the Thunder home in a pivotal game 7.

Despite being the favorites to win the series, the Houston Rockets were pushed to 7 games by an undervalued OKC Thunder with aging star Chris Paul. James Harden who has been infamous for choking in clutch games appeared to be doing the same. Despite averaging more than 30 points during the regular season,  he has always found it difficult to perform under heavy playoff pressure where the pace is slowed down and the transition is much smoother.

Having been widely considered one of the greatest offensive players the game of basketball has ever seen, he performed shabbily,. recording only 17 points while shooting only 4 of 15 shots from the field and 1 of 9 from the three-point line. Despite feeling the pressure of being eliminated by a lower-tiered team, Harden came up clutch in the final play. OKC attempted to pass the ball around and find the open man with less than 10 seconds left in the game. The ball went into the hands-on Luguentz Dort an undrafted rookie who made an impact against the Rockets was the leading scorer in this pivotal game 7 scoring 30 points leading both the Rockets and thunder as dominating scorer in this game. Harden noticed the ball going to Dort and dashed to make a stellar defensive play where he blocked the shot with his fingertips. Dort in frustration attempted to throw the ball off Harden to regain possession. Harden however decided to jump and dodge the ball as it bounced between his legs and let out a triumphant scream in celebration ensuring that the Thunder lost possession.

The clutch defense from Harden helped carry the Rockets over the Thunders lead by his old team-mate Chris Paul despite a weak offensive performance on Harden’s part. Harden had more assists and blocks in this game 7 in comparison to the previous games this round. The Rocket’s greatest challenge right now is beating the well-rested Lakers with Lebron and Anthony Davis, Despite the Lakers being the heavy favorites to win, The Rockets have beaten the Lakers twice in 3 encounters this year with the most recent victory being a 97-113 win in the NBA Orlando bubble before the playoffs. The Rockets will be the underdogs in this series with the odds likely against them. James Harden would love to prove the doubters wrong and take on the King, making this one of the most exciting rounds in the western conference to watch.