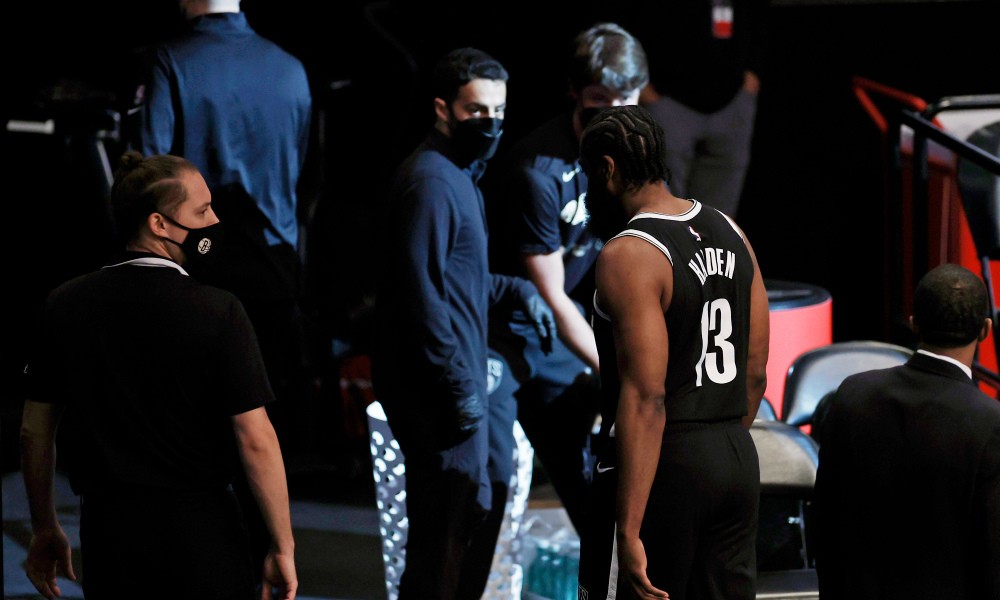 Within just seconds of the first game of the most anticipated matchup, injury strikes the Brooklyn Nets. James Harden drives into the paint with Jrue Holiday guarding him. He makes a pass out to the corner and he starts limping. He comes down with what looks like a hamstring injury.

James Harden leaves the game and does not return.

James Harden not only left the game but also the building to go get an MRI on his right hamstring. The Brooklyn Nets won tonight without him because they have the excess of firepower. They will not do what the Los Angeles Lakers did with Anthony Davis and rush James Harden.

Brooklyn’s Blake Griffin stepped up his game in James’s absence so that Brooklyn could take game 1 against the Milwaukee Bucks. On 31st March 2021, in a game against the Houston Rockets, James had left the game with Hamstring tightness so this is most likely a injury mismanagement. On April 5th he was sidelined with that right hamstring and missed games. They need to treat his injury properly or they could risk James Harden’s time in Brooklyn to be plagued by that Hamstring.

Steve Nash on James Harden: "I'm heartbroken for him." Nash adds he doesn't know whether or not Harden will be available for Game 2.
"This guy was so ready and excited to play tonight… You never want to see that when someone gives everything they have."

He will be under observation and results from MRI will determine whether or not he will continue playing against the Bucks.

What effect does this have for the Brooklyn Nets?

James Harden has graciously accepted the role of that 3rd star behind KD and Kyrie. He focuses more on distribution than scoring. He averaged 25 points per game which is low for a player of his caliber but he did also got 11 assists and nearly 9 rebounds. In the playoffs, he has become the number 2 option by bumping up his scoring and also maintaining his assists average. James Harden is also scoring 3’s on an elite percentage on 8 attempts a night. Because the load is well distributed James Harden is comfortable and had no pressure.

Kevin Durant in a post-game interview expressed his thoughts and feelings on James’s injury.

The thing about the Brooklyn Nets is that they are very top heavy. After their big 3, the scoring averages really drop. However, the Bucks would have to put Giannis on KD and Jrue on Kyrie because they are their best defenders. That leaves open Blake and Joe Harris to have great games of their own. If they can step up like they did tonight this Nets team can afford to let James Harden rest. Can Blake Griffin be at least 50% of the All-NBA player he once was so that the Brooklyn Nets can achieve greatness? I really hope so.