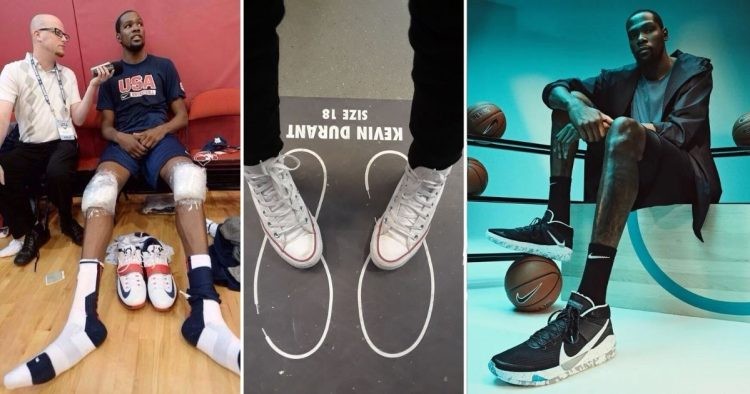 Kevin Durant broke the record for most points in a game 7 ever, with 48 points. Game 7 of the Eastern Conference Semi-finals between the Brooklyn Nets and the Milwaukee Bucks was intense. The bucks won the game 115-11 in overtime. Giannis led the Bucks from the front and put up 40 points and 13 rebounds.  However, the game was intense throughout and it was neck-neck.

Game 7, series on the line, the score is 107-109, Kevin Durant has the ball, he pulls up to take a shot. Fans are on the edge of their seats, the shot goes in and everyone thinks it’s a three-pointer. On review, it was noticed that Kevin Durant’s shoe tip had just touched the line, making the shot worth only two points and sending the game to overtime.

Kevin Durant is known for having ridiculously huge feet and also for his shoe slipping off his feet during games. Kevin Durant has a lost a shoe in the middle of a game close to 30+ times in the past three seasons.

Watched hours of tape and found that Kevin Durant has lost a shoe in the middle of a game at least 31 times the past three seasons, which equates to once every eight games. But the real question is: Why? https://t.co/s8C0leSS7a pic.twitter.com/m2CmHxgTaG

KD has size-17 feet but he prefers to wear a size bigger. This preference may have cost Kevin Durant and the Brooklyn Nets a chance at winning a championship this season. When asked about the long two-pointers, KD said,

My big ass foot stepped on the line, I just saw how close I was to ending their season with that shot.

In the past when asked about why he prefers wearing a size bigger on his feet, Kevin Durant explained how it feels like he’s wearing a slipper.

These are like slippers, man, And I just try to be as efficient as I can when I create what I want out there. I don’t want something that’s too bulky. So, sometimes they may come off, but the good thing is, I can slip them back on and keep playing.

The Nets are not blaming a shoe size and KD for their loss, it just was not their day. KD proved to the world yet again, why he is one of the best players in the league.

NBA Playoffs: Is Chris Paul playing in Game 1 vs the Los Angeles Clippers?