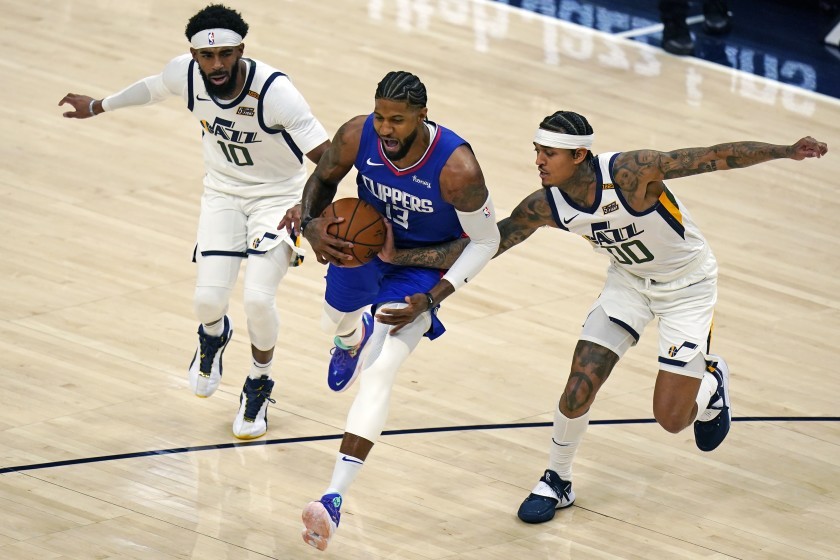 LA Clippers are set to play Utah Jazz in the western conference semi-finals tonight after a long and hard-fought battle against Luka Doncic and the Dallas Mavericks. While LA’s first-round series stretched up to Game 7 and concluded just the day before, Utah is well-rested after closing out Memphis Grizzlies in 5 games a week ago.

Clippers can count on Kawhi Leonard every night to come up big and close out with a clutch performance. In addition, Paul George has clearly shedded the pandemic P name in the series against Dallas averaging 23.6 points, 10 rebounds, and 5.6 assists a night. Utah Jazz on the other hand doesn’t rely on their all-stars but shares the load. Donovan Mitchell has returned healthy as ever and helped his team to 4 straight victories over Memphis.

Utah Jazz and LA Clippers played 3 games in the regular season and the former won 2 of those.

Utah Jazz is the top seed in the much competitive western conference and they’ve been playing like it so far in the playoffs. Although the Jazz was a first-round exit in the previous two seasons, they have come a long way from that. They are the hottest team in the NBA and retained the #1 seed despite Donovan Mitchell missing several games towards the end. LA Clippers on the other hand had a disappointing postseason run in the bubble losing to Denver Nuggets after taking a 3-1 lead. While that was largely due to the underperformance of Paul George and Lou Williams, lack of team chemistry and lock room tensions were a significant part of it as well. They seem to have improved on that ever since Montrezl Harrell Lou Williams departed from LA Clippers. They were down 0-2 against the Dallas Mavericks but won road all games and a home game 7 to advance in the playoffs.

Both teams finished top 10 in offensive and defensive rating in the NBA and are a balanced match up. This series will not be one-sided in any way but Utah Jazz has an advantage over the Clippers entering Game 1 of the conference semi-finals tonight. Jazz is well-rested whereas the Clippers are exhausted from the series against Dallas Mavericks even though they may have the momentum.

Utah Jazz is expected to win Game 1 tonight against the LA Clippers despite the fact that this series can go either way in the long run.

How to watch Clippers vs Jazz Game 1?

LA Clippers vs Utah Jazz will be televised nationally on TNT at 10:00 PM ET. International viewers can access the game on NBA League Pass.