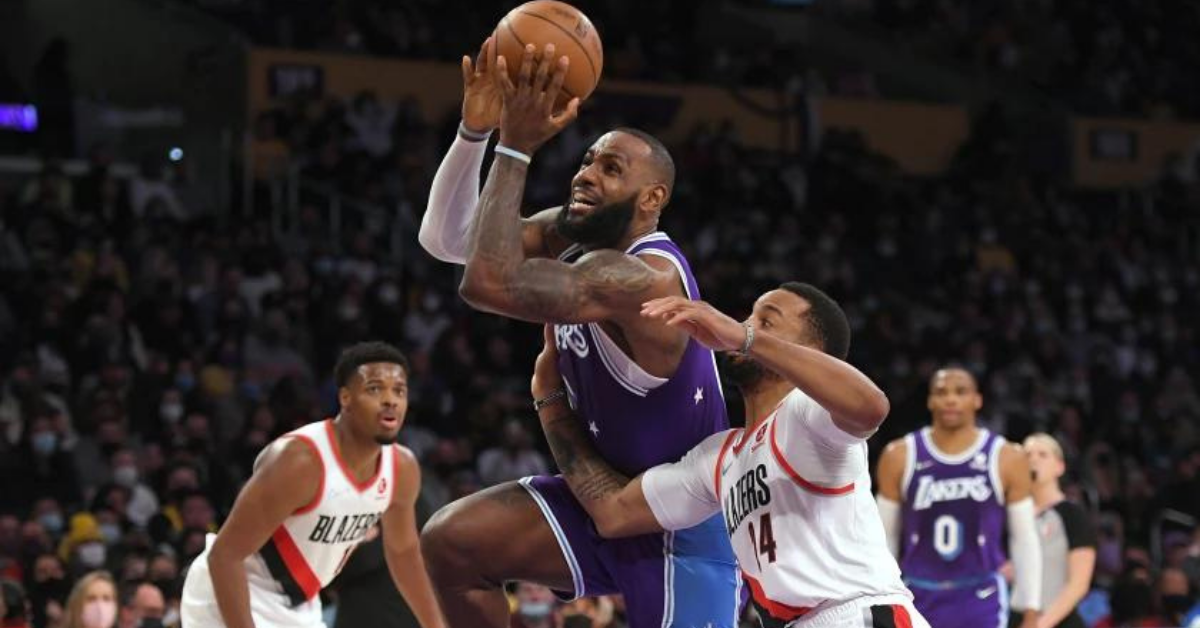 Second Day of 2019-20 NBA Playoffs was filled with 8th seeds upsetting top teams. While Milwaukee Bucks lost to Orlando Magic with a double-digit deficit, LA Lakers led by LeBron James struggled to get past Portland Trail Blazers. Damian Lillard‘s clutch 3 pointers led Blazers to a stunning victory over Lakers 100-93 in their favor. Anthony Davis scored 28 points and 11 rebounds to record a double-double in Lakers Playoff debut. On the other hand, Damian Lillard who was largely absent from the game initially added 34 points to his stat sheet with impressive deep 3s.

LA Lakers shot 35% from the field and 32% from the three-point line while Danny Green experienced an off night. In addition to poor officiating and constant whistles, bad shooting was the reason behind this loss. In a disappointing game 1 matchup, LeBron James made history by breaking multiple records of NBA as well as Lakers franchise history. He concluded the game with a triple-double of his own.

Hey @NBAOfficial this is the PLAYOFFS…nobody want to watch y’all blow the damn whistle all night!!!

Healthy Portland Trail Blazers are in no way an 8th seeded team and they proved it tonight with this victory over LA Lakers. Dame time was contained in the first three quarters as Lakers double-teamed Damian Lillard. Blazers started out with an uncontested lead in the first quarter while Lakers struggled to get open looks despite an impressive shooting line up.

In 2018, Anthony Davis and the New Orleans Pelicans swept Portland Trail Blazers in the first round, however, that possibility is out of the question this time even with LeBron James by his side. Lebron was the only facilitator for Lakers in Rajon Rondo and Avery Bradley’s absence.

Rip city could not hold on to the lead for long as Lakers cashed in on back to back possessions facilitated by LeBron James to cut down the chase from down 16 to 2. It was a welcoming sight for the Lakers when Green hit a wide-open 3 from LeBron, LA’s first in 9 attempts. Then after another stop, Morris hit a 3 and Dwight Howard finished the 7-0 run with a monstrous dunk of his own tilting the backboard.

Anthony Davis controlled the pace with just his presence on the court drawing contact in every other possession. Lakers finally took the lead towards the end of the second quarter with LeBron’s on-court vision on full display. He had 10 assists in the first half, inching closer to breaking his own playoff assists record.

Chuck brings out the broom after Portland’s win ???????? pic.twitter.com/NrCmtLzsrh

Lakers played much better defense in the third quarter, restricting Damian Lillard to just 2 points while maintaining the lead. 2003 draft class #1 and #2 picks LeBron James and Carmelo Anthony went back forth in a friendly duel throughout the quarter. Damian Lillard finally showed up in the end, draining 3s from deep to tie the score twice in the fourth quarter while CJ McCollum provided them with an effective midrange. With just under 7 minutes remaining, foul trouble was stocking up for Portland Trailblazers. Hassan Whiteside had two massive blocks on KCP and LeBron James in the final few minutes and Carmelo Anthony’s clutch 3 secured the W for Blazers.

List of records broken by LeBron James in this game