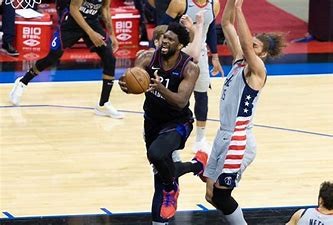 The Philadelphia 76ers were on a roll, close to picking up a playoff first-round sweep. Game 4, everything changed when the Washington Wizards came out full force and won the game 122-114. The game saw Bradley Beal put up 27 points with 4 assists and 4 rebounds. Russell Westbrook also lent a hand and put up 19 points with 21 rebounds and 14 assists. The Wizards also took advantage of the fact that Joel Embiid was injured during the game.

Just as the series seemed to be slipping away from the Washington Wizards, they have survived yet another day in this race to win a ring.

The Washington Wizards are down 1-3. Although there was a small ray of sunshine with the previous game, The Washington Wizards still have a lot of work to do. The Philadelphia 76ers are in a comfortable position, however, they will be at a loss as Joel Embiid who injured himself in the previous is questionable for game 5. If Joel Embiid plays he will be one of the key players in the game tonight and things are sure to go the 76ers way. Even without Embiid, The 76ers are in a better position to win Game 5 and proceed forward in the playoffs. Ben Simmons has a PPG of 14.3 and a PG of 7.2 and can be one hell of a guard who can add some quick passes, clean blocks, and rebounds. The Man is also well known for his defensive skills.

Game five between the Philadelphia 76ers and the Washington Wizards is predicted to go the 76ers way.

How To Watch The 76ers vs The Wizards?