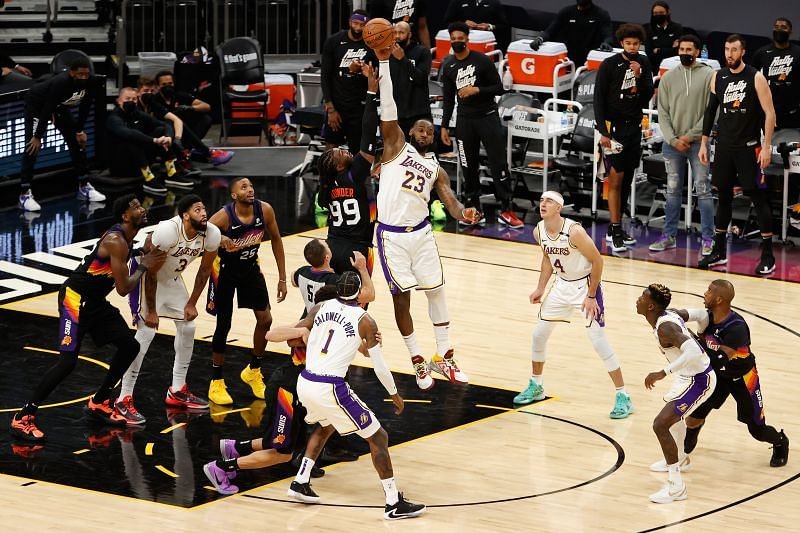 The defending champions, the Los Angles Lakers have been matched up with the Phoenix Suns for the first round of the western conference playoffs. The series so far has been costly for both sides. Chris Paul of the Phoenix Suns suffered a shoulder contusion in game 1. He was clearly not at full strength in games 2 and 3 scoring only 6 and 7 points in those games.

However, the Suns blocked out the narrative and expectations of the world. They won games 1 at home and 4 in Los angles to tie the series at 2-2. The series moved back to Phoenix as both teams faced the pressure of win or face elimination. Anthony Davis suffered an injury in game 4 and was ruled out for this pivotal Game 5. Losing key players on both sides to injuries has made this series extremely competitive. One can expect this series to go to 7 games. 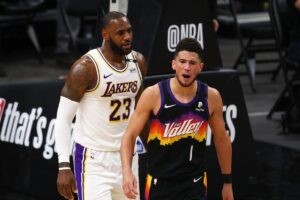 Chris Paul’s shoulder injury continued to harass him through this game. Nevertheless, the young Pheonix Squad completely dominated the Lakers throughout the game.  Lebron James scoring 24 PTS, 5 RBD, 7 AST was simply not enough to win the game. Two of the Los angles lakers starters; Dennis Schroeder and Kentavious Cadwell Pope scored a grand total of 0 points to support the king in this pivotal game. The series now moves back to Los Angles for game 6 where the Lakers now face the pressure of elimination and will attempt to force a game 7.

Devin Booker had an absolutely dominant night and started off the suns blazing hot. He had 18 points in just the first quarter. He ended the night with a game-high 30 PTS, 7 RBD, 5 AST. The Phoenix Suns absolutely scorched the LA Lakers in the second quarter going on a 32-10 run. The home crowd cheered loudly for the young suns squad who put the game out of reach for the defending champions. Kyle Kuzma was the only other Laker player besides James to reach double figures with 15 PTS and 1 RBD.

The Phoenix Squad shot better from the field had more assists, blocks, steals, and fewer turnovers. This was despite the Lakers keeping up with them in terms of rebounding and 3 point shooting percentage. Chris Paul ended the night with 9 PTS 6 AST, 4 RBD after having played only 23 minutes of the game. The Suns now head to Los Angles where they will hope to finish this series in 6 games.

Lebron James has never faced the threat of elimination in the first round in his years in the Eastern Conference. Anthony Davis’s injury along with the lack of performance from the Lakers bench has proved fatal in Phoenix. James now faces the daunting task of winning both at home and on the road consecutively in order to avoid elimination.

This series has taken an abrupt change. The Phonix Suns snatched the souls of the defending champions in a blowout victory 115-85. Dealing a 30 point loss to the Lakers in this pivotal game isn’t simply a punch to the face. It is a blow to the head with a tombstone. The Lakers now have to play their best basketball without their starting lineup in order to win this series.