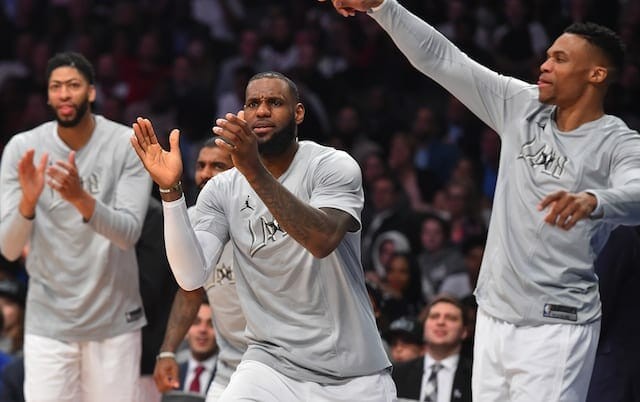 LA Lakers will face Golden State Warriors for the second time in the preseason on Tuesday night. They are 0-4 in the preseason so far, however, they look to change this by playing their ‘Big 3’. LeBron James, Anthony Davis, and Russell Westbrook will share the court in the same jersey for the first time on 12th October.

Although it was a preseason game, the first face off between Golden State Warriors and LA Lakers was fierce. Despite a good lead put up by the Lakers in the first quarter, Warriors bounced back and dominated the entire game. Stephen Curry and Jordan Poole combined for 58 points which is unsual for a game that doesn’t count.

Anthony Davis says him, LeBron and Russell Westbrook will all play together for the first time in Tuesday’s preseason game against Golden State. AD added that he’ll be playing the 5 with that group.

Also Read: LeBron James Is the Only American Athlete to Cross 100 Million Followers on Instagram

LA Lakers acquired Russell Westbrook in a trade this offseason. He will assume the point guard position with LeBron going back to SF. Anthony Davis only played against the Brooklyn Nets, limited to 11 minutes by Frank Vogel. They want to ease him back as the big man is injury prone and losing him in preseason would be devastating.

LeBron James only played against the Warriors few nights ago and missed the game against Phoenix inorder to supper Cleveland Browns in the playoffs. Russell Westbrook on the other hand, played two games and had the worst possible start with the Lakers franchise.

"We have to be better.. There's going to be an adjustment period with so many new faces, we understand that. Hopefully it doesn't take too much time to get everyone on the same page." Frank Vogel on his takeaways through 4 preseason games. pic.twitter.com/w3xuBDPxxR

He had a total of 16 turnovers on 4-19 shooting with little to no defensive effort by the opponents. Westbrook is clearly struggling from the mid range, to the point that defenders don’t guard him anymore. In addition, he had the ball stolen from him 5 times back to back in the game against Golden State Warriors.

While it”s true that players tend to get rusty after offseason, Westbrook has been struggling with turnovers his entire career. Lately, he has been averaging close to 5 turnovers a game which is high even for a pass-dominant player. He recognized these mistakes, however, brushed them off saying he is new to the dynamic and these games don’t count.

The upcoming game is the perfect opportunity for the LA Lakers to gauge themselves against the Golden State Warriors with their complete roster as the two teams are set to face each other on opening night as well.