It was a close victory for Dallas and they definitely have something to worry about this time around. Although it’s unfair to say Mavericks won only because of Dejounte Murray’s sprained ankle, it certainly was a factor. The outcome of tomorrow’s match depends on several factors and some of them than happened off the court.

The Spurs are making a come back after a rocky start to the season. They were the 7th seed prior to the All-Star break and only a game and a half behind the fifth-seeded Portland Trail Blazers. Dallas Mavericks on the other hand are still struggling to maintain a winning streak. They keep juggling ina nd out of the top 8 position in the western conference which is concerning. This can largely be attributed to the fact that they suffered injuries and few key players missed games due to covid-19 protocols.

Although Dallas Mavericks won the last head to head matchup, Spurs are coming in healthy tomorrow. Statistically, Dallas has an advantage over the Spurs in all aspects offensively. They average more points per game and better efficiency. They’re locked and loaded ver since KP’s return and they rank better than the Spurs defensively as well. 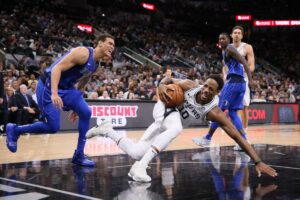 However, the San Antonio Spurs might be fuelled by something that happened off the court. DeMar DeRozan was snubbed form being named an all-star this year despite great performance throughout the 2020-21 season. The Spurs and DeRozan are severely underrated this season. This will definitely reflect on the court tonight which will be the deciding factor since both teams are comparable when it comes to stats.

San Antonio Spurs will win tonight in a close game against the Dallas Mavericks as both teams face each other perfectly healthy.

How to watch Mavs vs Spurs?

Dallas Mavericks vs San Antonio Spurs will be aired on FSSW-DAL for regional viewers in Dallas and FSSW-SA for San Antonio residents. International users can access the game on NBA League Pass.