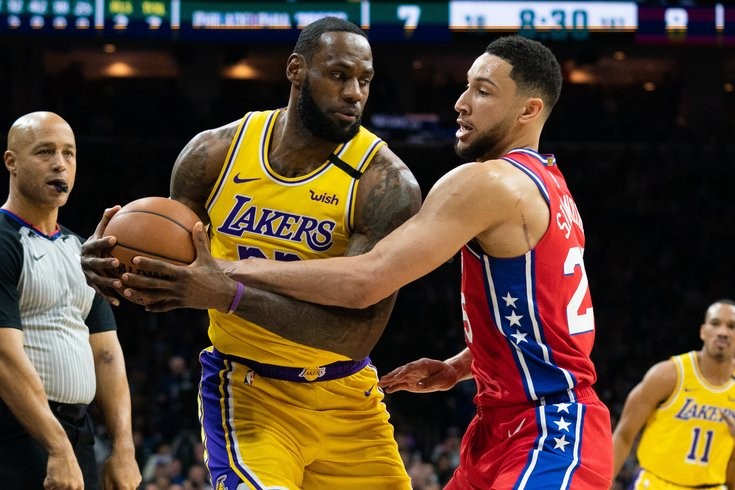 LA Lakers and the Philadelphia 76ers, the teams with the best records in their respective conference, battle it out to secure the best record in NBA. While the Lakers boast a 14-4 record in a much more competitive east, the 76ers hold 12-6 in the west. Both teams have had an easier schedule so far, facing one title contender each.

LeBron James, in his 18th NBA season, is entering the MVP conversation despite having big man Anthony Davis by his side. He has assumed the playmaker position with the Lakers and is playing exceptionally well for a 36-year old. LBJ balled out Monday night against his former team Cleveland Cavaliers recording 46 points, 6 assists, and 8 rebounds.

Joel Embiid on the other hand is making himself heard this season with MVP caliber performance. He is currently third on the leaderboard and is in line to win it as well. After an injury-ridden bubble stint, the 76ers have bounced back stronger than ever.

This might be the toughest matchup to predict. Defending champions LA Lakers face the Philadelphia 76ers, the team with the best record in the eastern conference. It won’t be an exaggeration to say we might be watching potential NBA finals match up tonight. Both teams are on pace to secure a playoff position and make it to the finals.

While LA Lakers are coming off a big-time victory over Cleveland Cavaliers, 76ers faced a rare loss against Detroit Pistons. Both teams are fully stacked without any covid casualties or injuries. However, LeBron James and Anthony Davis are listed as questionable for tonight. It will be a game-time decision by coach Frank Vogel. Philadelphia 76ers at one point had a rough patch losing most of its roster due to covid protocols and contact tracing measures taken by the league. To fans’ delight, everyone is available for the match against the Lakers.

Statistically LA Lakers are exceeding the Philadelphia 76ers in every aspect. However, the difference is not significant. Lakers are averaging 114.3 points per game whereas the sixers are averaging 113.7 with lower FG%. LA has the uppers had in ball movement, defense, as well as rebounds.

Although this is the first time LeBron and AD are matched up with defenders comparable to their physical stature in their positions. Joel Embiid and Anthony Davis are a fun matchup on the court and Ben Simmons is an established defensive player. Even though opponent FG% for the Lakers is lower when compared to the Philadelphia 76ers, later is better at post defense.

In conclusion, LA Lakers have the upper hand statistically and they have the momentum as well. Lakers bench will significantly outscore the sixers bench which will be the deciding factor of the game. LeBron James and AD will defeat Joel Embiid and Ben Simmons in a close battle.

How to watch LA Lakers vs Philadelphia 76ers?

LA Lakers vs Philadelphia 76ers will be aired on ESPN nationally as well as SPECSN for LA residents. International users can access the game on NBA League Pass.