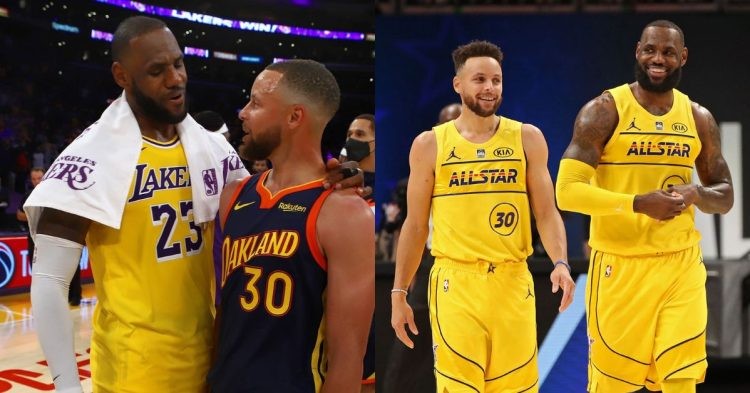 Stephen Curry has had an exceptional year. The Baby Faced Assassin won his 4th NBA Championship with the Golden State Warriors. His recent ring meant that he tied with LeBron James for most titles won among active players. If the title was not enough, Steph also bagged his first-ever Finals MVP. Although he has put up dominant performances in the NBA Finals in the past, he could win it.

However, this year was one to remember for him. The Warriors superstar averaged 31.2 points, 6.0 rebounds, and 5.0 assists in 6 games against the Boston Celtics.

One of his best performances included an incredible night during Game 4. Steph made 43 points, 10 rebounds, and 4 assists in just 41 minutes that game. Those numbers are truly the definition of magic. His performance that night caught the attention of the world. But two of the most notable NBA personalities

LeBron James replied to his former teammate Dwyane Wade’s tweet that appreciated Steph. Dwyane said, “Everyone keeps talking about what Steph ain’t. Let’s talk about what he is. A BAD MFer!”

FACTS!!! “THEY” will try to do anything in their powers to not acknowledge simply how “DIFFERENT he is! It’s Rare and rare is not liked & appreciated.

LeBron added on and chose to hit back at Steph’s critics. The Lakers star tweeted, “FACTS!!! “THEY” will try to do anything in their powers to not acknowledge simply how “DIFFERENT he is! It’s Rare and rare is not liked & appreciated.”

Both James and Wade have seen everything the league has to offer. They have gone through the highs and lows that come together with the NBA. Their experience with the league for more than a decade should tell you that they know brilliance when they see it. Steph is “rare” and “different” as LeBron said. He is a unique combination of pure skill, flair, and shooting prowess.

Apart from his shooting, his off-the-ball movement is also one of his best attributes. Despite all this, Curry’s haters and critics still find a way to diminish his achievements. LeBron mentioned that they will do anything to ignore how “different” Steph is and that could not be further from the truth.

The Chef’s impact on the game and how he changed shooting forever should speak for themselves. He is surely one of the best we have ever seen. Moreover, we all know that he will continue with his magic no matter what the haters say.

After the tweets, Steph was in awe after the former Miami Heat pair showed love for him. It’s not every day you get compliments from your childhood heroes and you get to witness firsthand how much of an impact you’ve made.