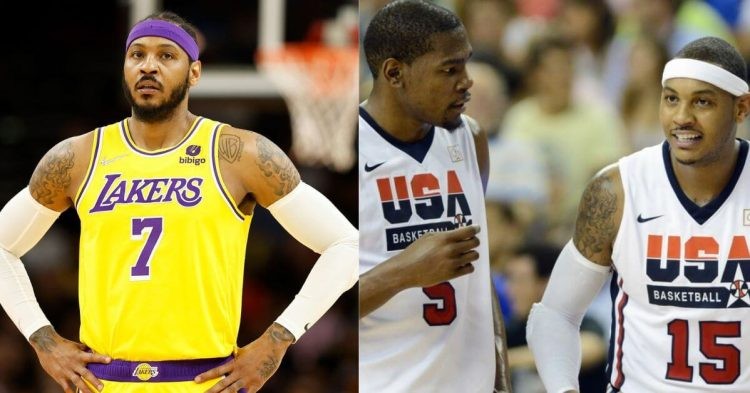 Kevin Durant and the Brooklyn Nets have had a very disappointing NBA postseason. They were unable to win a single game of the playoffs and were swept by the Boston Celtics. Losing in this manner has made the Nets consider trading for Los Angeles Lakers veteran Carmelo Anthony.

The Nets dealt with many issues this season. James Harden demanded a trade and moved to the Philadelphia 76ers midway through the season. Additionally, Kyrie Irving’s play was restricted by compulsory vaccination mandates. Therefore, the Nets fell to the bottom half of the eastern conference and finished as the 7th seed. They hope to avoid repeating this by signing Melo.

Reports have emerged that two teams are reportedly interested in Anthony. They are the New York Knicks and the Brooklyn Nets. If the Lakers do not keep Melo, there is a good chance he moves to one of these teams to end his career.

The New York Knicks would actually be a preferential destination in comparison to the Brooklyn Nets. This is because Carmelo spent many years of his prime with the Knicks, 7 years to be exact, from 2010 to 2017. He has had some of the best highlights and moments of his life at Madison Square Garden. Therefore, it would be fitting for him to return there to finish out his career.

The Brooklyn Nets would prove to be a challenge for Melo. There are expectations that will come with playing alongside Kevin Durant and Kyrie Irving. It is unlikely that he will be able to change his game and adapt to another system of offense. One with Steve Nash as his coach.

Furthermore, the Nets have a weak defense. This is why Ben Simmons was added to the mix. Even if he struggles to have a good offensive game, he will still be able to contribute on the defensive end of the floor, where his size and athleticism will help the Nets.

The opposite is true for Carmelo Anthony. He was never a defense-oriented player, even in his prime. Therefore, it is ridiculous to expect him to be a useful defender in a team with championship aspirations. Moreover, his iso style of scoring would only lower the efficiency of both Kevin Durant and Kyrie Irving and force them to play more off-ball.

All the above reasons are why the Knicks are more likely to trade for Melo if anyone does.