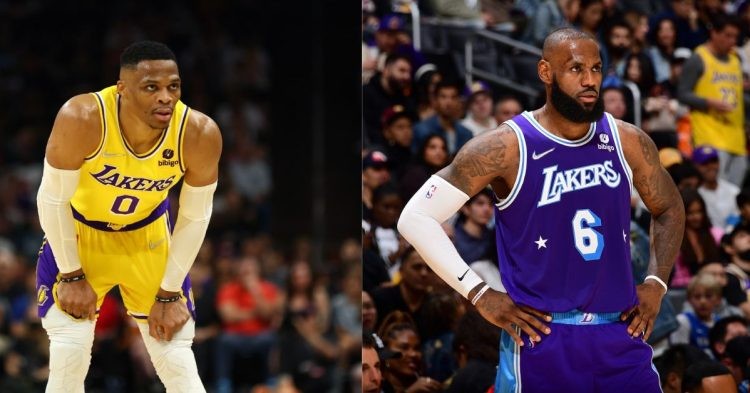 Just one season ago, LeBron James, Anthony Davis, and the LA Lakers made a trade with the Washington Wizards in order to acquire Russell Westbrook. However, things seemed to fall apart and the star-studded team seemed to do worse as the season went on. Additionally, they had very few games when all 3 stars were not injured. This was a reason they missed the 2022 NBA playoffs.

Many people blamed Russell Westbrook for the Lakers’ disappointing performance last year. He averaged 18 points 7 assists and 7 rebounds with them. However, he was also considered erratic, impulsive, and turnover prone. This has led to a report by Dave McMenamin, an NBA reporter, indicating that King James has “seen enough” of Westbrook and does not want to give it another shot.

One must wonder whether we will expect LeBron and Russ on the same team throughout the next NBA season. If the report is true there are problems between them that are not shown for the media to see.

Sometimes the bluntest way to say something is the right way to say it. Jeanie Buss and Rob Pelinka are the business heads of the LA Lakers. They were ecstatic when LeBron managed to win the 2022 NBA title in the Orlando bubble. Therefore, when they fell short next year in the first round to the Phoenix Suns, they agreed to bring Russ to LA.

There were several reports from Dave and others that claimed LeBron James and Anthony Davis were pivotal in pushing the Lakers to make a move for Russ. Especially King James, who had known Westbrook for years at that point. Jeanie and Rob decided to send a lot of players to Washington in return for Russ to appease LeBron. However, now LA is looking to trade what they bid so vigorously on.

” Rob Pelinka has been making phone calls to teams about trying to trade Russell Westbrook out of town. Now the latest intelligence I have is that things have moved on the Brooklyn front there is no traction on a deal to send Russell Westbrook out and Kyrie Irving in… There have been some talks reengaged between Lakers and Indiana Pacers.”

Kyle Kuzma, Kentavious Cadwell Pope, and Montrezl Harrell were traded to the Wizards in return for Russ. This was the steep price the Lakers paid in order to keep King James in championship contention during his stay there. However, now LA is looking to trade what they bid so vigorously on.

We all know this never came close to fruition as LeBron and Russ failed to even make the NBA playoffs. This was quite a disappointment for the Lakers heading into this upcoming season. It is unclear whether Dave McMenamin’s report is dead-on accurate. However, it is likely that some friction exists between the two.