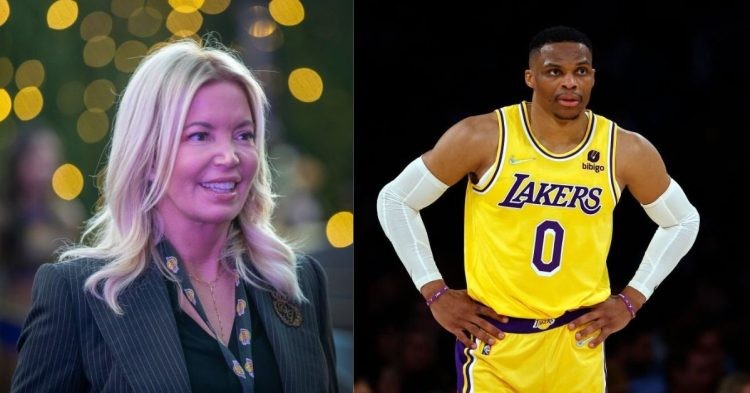 The LA Lakers are currently looking to bounce back from two continuous seasons that ended in a disaster. Since winning the title in 2020, the Lakers have failed to make the playoffs twice in a row. Although there were many reasons for their failures, many fans seemed to blame Russell Westbrook.

Westbrook came to Los Angeles in August 2021 in a trade deal that involved several other players. Kyle Kuzma and Spencer Dinwiddie went the other way together with other former Lakers players including the draft rights for Isaiah Todd.

Russ was an unstoppable player during his prime. That was when he was with the Oklahoma City Thunder, together with Kevin Durant. However, his career has taken a drastic turn as Russ is struggling to replicate that old form ever so slightly. During the 2021-22 NBA season, Russ averaged 18.5 points, 7.4 rebounds, and 7.1 assists in 78 games. Although these are decent numbers, they’re surely not what the fans expect from him.

Recently, the franchise’s president, Jeannie Buss spoke to The Athletic. One of the questions included asking about Patrick Beverley, whom the media claims to be Russ’ arch-nemesis for a while now. She used Kobe Bryant and Matt Barnes’ relationship back in the day as an example to deliver her point.

Jeannie mentioned, “Pat Beverley was brought here to play defense, to be that guy that knows how to push his teammates, sets an example with how he approaches his job. … So it has nothing to do with Russ.”

That wasn’t what caught the attention of fans. In addition to that, the 60-year-old also supported Westbrook despite his disappointing season as many claim. She said, “All I can say is that, from my point of view, he was our best player last year. He played pretty much every single game, showed up, worked hard. You know, I would have loved to have seen what this team would have looked like if they stayed healthy.”

“It’s really tough to win when Anthony Davis isn’t on the court. LeBron was hurt a lot of the season. But Russ showed up every game and played hard every night. And, you know, I just really appreciate him for who he is and what he brings to the team,” Buss added.

As Buss said, Westbrook always gave his all for the team. He became the leader they needed in the absence of Anthony Davis and LeBron James. Moreover, haters claim that he is ‘finished’ due to Russ’ lack of chemistry with AD and LeBron. That could change next season as the Lakers have brought in a new head coach in Darvin Ham.

With Beverley also on the team, the Lakers’ defense looks stronger now. Ham may even choose to put Russ alongside Pat Bev, together with Davis and James. If that works out, the Lakers will surely be one of the strongest teams in the West.