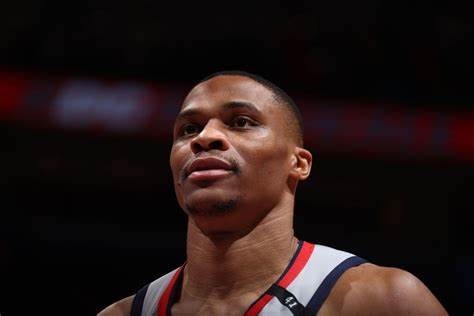 Russell Westbrook is a point guard for the Washington Wizards. Westbrook is a nine-time NBA All-Star and the 2016-17 NBA MVP. He also won back to back NBA All-Star Game MVP awards in 2015 and 2016. As of 2021, Russ also holds the record for the most number of triple-doubles in a career in NBA History. Throughout his run in the NBA, Westbrook has been a part of three franchises.

Russ was the fourth pick in the 2008 draft. He had been chosen by the Seattle SuperSonics that relocated to Oklahoma and became Thunder. As a Rookie, Westbrook averaged 15.3 points, 5.3 assists and 4.9 rebounds per game. He also recorded his first career triple-double on the 2nd of March 2009. 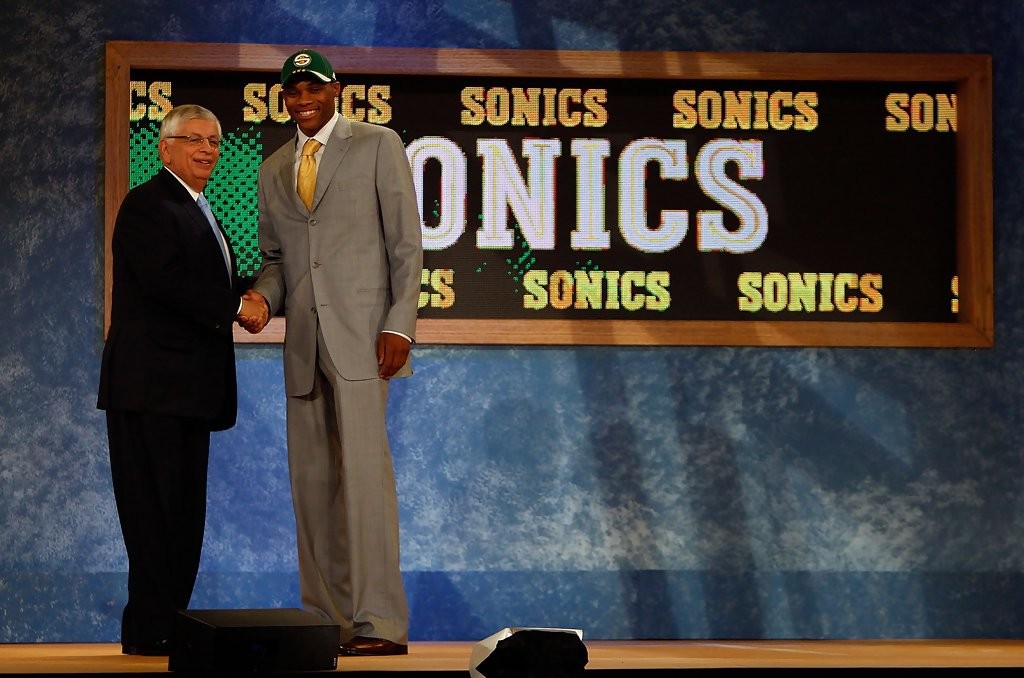 Westbrook had a lot of success from 2010-13, especially in the All-Star games. In the 2010 playoffs, the Thunder were eliminated by the Mavericks in the WCF. In the 2011-12 season, Russ once again helped the Thunder reach the playoffs. This time, Westbrook fought hard and made sure his team reached the NBA Finals. The Thunder however lost in five games to the Miami Heat.

The 2012-13 season was no different. Wonderful performances from Westbrook helped the Thunder reach the playoffs. However, the playoffs were a disappointment for Thunder fans as Westbrook was ruled out due to a tear in his right meniscus. The Thunder made it past round one but was eliminated by the Grizzlies in 5 games in round 2.

The 2013-14 season saw Russ go through a  lot of pain due to his injury. He missed many games but thanks to Kevin Durant the Thunder faired well in the NBA. Russ came back in time for the playoffs. But the Thunder lost to the Spurs in the Conference Finals.

In the 2016-17 season, OKC traded Kevin Durant to the Golden State Warriors. Russ on the other hand signed a three-year extension with the Thunder. The 2016-17 season was phenomenal for Russell Westbrook. He reached his 50 point triple-double in the same season. He also had a seven streak triple-double, that tied with Michael Jordan for the longest triple-double streak.

Throughout the entire season, Westbrook was dropping triple-doubles like Curry drops threes. The Thunder made the playoffs and was up against the Rockets in round 1. They did not make it past round one and were eliminated after going4-1 in the series. Russ Westbrook was crowned NBA MVP 2017.

After the MVP season, Westbrook had two more triple-double seasons in 2017-18 and 2018-19. After the 2019 season, Russell Westbrook decided to end his 11 year-long run at Oklahoma and join his former teammate, James Harden at Houston.

In 2019, Westbrook was traded to the Rockets in exchange for Chris Paul. Westbrook was happy to be reunited with long time friend, James Harden. The two of them had last played together for OKC in the 2012 finals. In his debut for the Rockets, Russ led the team with 24 points, 16 rebounds and 7 assists in just 33 minutes. In his second game, he became the second all-time in career triple-doubles. He also passed Tony Parker on the NBA all-time career assist list. 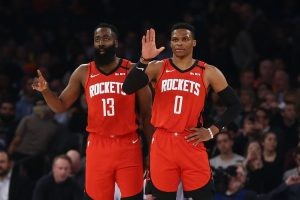 The NBA was suspended due to the COVID-19 pandemic. The Rockets were one of the teams that returned to the NBA bubble for a playoff spot. Westbrook helped the Rockets reach the semifinals but they lost 4-1 to the Los Angeles Lakers. This postseason was the worst postseason record for Russell Westbrook. he finished the playoffs with only 17.9 points, 7.0 rebounds and 4.6 assists per game.

In 2020, James Harden decided to move to the Brooklyn Nets. Russell Westbrook was traded to the Washington Wizards in exchange for John Wall. On his debut for the Wizards, Westbrook became the sixth player in NBA history to post a triple-double in a team debut. Against the Pacers on the 30th of March, Westbrook became the second player to put up 30-10-20 Triple-double. It was evident that Russell Westbrook had the capability of performing on both ends of the court.

After March and April, Russ became the first player to record a minimum of 300 points, 150 assists and 150 rebounds in consecutive months since Chamberlain. The Pacers seem to love watching Russell Westbrook break records. He tied Robertson’s record for 181 Triple-Doubles in a career against the Pacers on the 8th of May.

On the 10th of May, Westbrook made history and officially earned the title of Mr Triple-Double. Russ put up his 182nd triple-double with 28 points, 13 rebounds and 21 assists. The Wizards also managed to clinch a playoff spot. However, they were eliminated in round one.