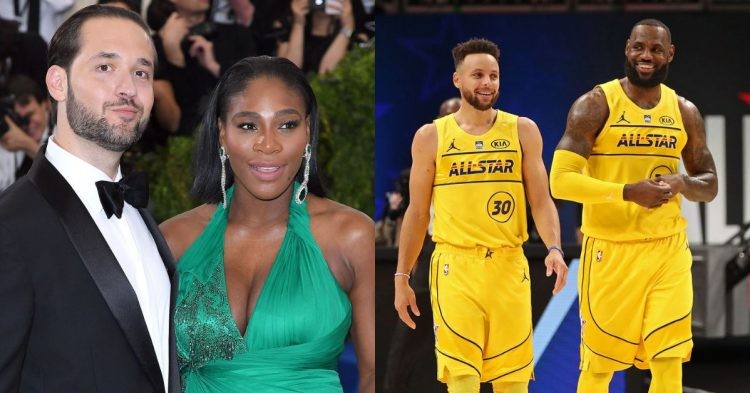 Serena Williams has been the best Women’s tennis player of all time. However, she also hit the jackpot off the court. Her husband, Alexis Ohanian is an entrepreneur who made a name for himself on his own. The American is famous for being a co-founder of Reddit. Recently, Ohanian tweeted about the NBA All-Star games. The tweet caught the attention of many.

Alexis often tweets about sports without being shy to voice his opinion. The interesting part is that he is also an investor in Angel City FC. The newly started club made its NWSL debut earlier this year. The tennis star’s husband isn’t new to the world of sports. We can expect him to understand the culture and tradition that goes on here.

Hey Twitter – what is it about the programming for @NBA all-star weekend that makes it such a fun spectacle? Like people come to town for it in a way I don’t see in other major pro sports. Is it just because it’s so tied into the culture?

Alexis Ohanian tweeted, “What is it about the programming for NBA all-star weekend that makes it such a fun spectacle? Like people come to town for it in a way I don’t see in other major pro sports. Is it just because it’s so tied into the culture?”

The American questioned the reason why the NBA All-Star games are so popular. He asks a valid question from the correct point of view. The All-Star games we have are of the most popular events in the world.

The exclusive matchup between the two of the best teams happens every year. A voting poll picks the captains for each team. Each captain will then pick his team for that year’s game. This year, it was LeBron James and Kevin Durant against each other. The Lakers star’s side beat the other team that had Trae Young, Ja Morant, Joel Embiid, and a few other superstars.

How popular was the last NBA All-Star game?

For the 2022 NBA All-Star game, viewership added up to a total of 6.2 million. From just TNT, the game had 5.4 million people watching. The figure of the total viewers was in fact an increase of 6% from 2021. It was just around 5.9 million last year. Fans were not allowed into arenas in 2021 due to the COVID-19 pandemic. Despite that, the viewership fell even though people were at home.

Moreover, the game happened exactly at the time when the Winter Olympics 2022 was ending. We can argue that viewership could have decreased once again this year due to other famous sporting events.

Adding on, the attendance in the arena is expected to be at more than 19,000. The game saw people come from all over the country. The sole purpose of the game is to give fans what they want. We as fans, want to see the best players going up to each other. And watch them do what they do best, make fans happy with their game.

When the weekend arrives, the place itself is like a festival. It acts as a platform to bring people together for something they all love. Moreover, even after the game, the highlight reels from the game will be all over the internet. People will still be going crazy over LeBron’s dunk or Steph going for a three from way back.

Being an All-Star itself is an honor for many young players. When you talk about what an NBA athlete has achieved, it’ll be mentioned that they were an All-Star, if they performed well enough. Due to this, the game and the weekend that it falls on has become a whole event that people enjoy. That should explain the reason why it’s so famous.