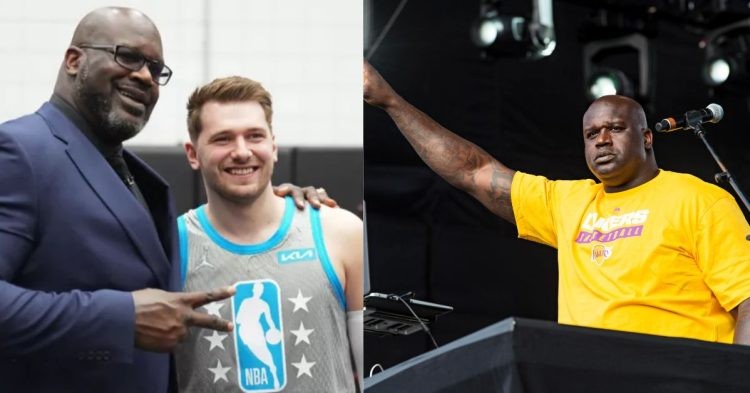 Although his playing days are well behind him, Shaquille O’Neal is still a popular household name and famous across the sports world. In fact, many modern-day players are on good terms with him. One such player is Luka Doncic of the Dallas Mavericks. Not many NBA fans know that he went partying with Shaq a while ago.

One must wonder about what they did together and how they enjoyed each other’s company. Moreover, Baby Bird has even revealed a new nickname that he anointed Shaquille O’Neal. It is important to understand the context behind the occasion, what nickname Shaq was given, and how he felt about it all.

Doncic is from Slovenia, a country in Europe. One of its neighboring nations is Croatia. He is quite a popular figure in those countries due to his success in basketball. Therefore, he decided to chauffer around and take care of Shaq when the Lakers legend decided to go on a party tour as DJ Diesel.

Moreover, Goran Dragic, another European player was also a part of the celebrations and was present with Luka and Shaq. The 4x NBA champion revealed how this entire experience felt to him and what went down.

“Shoutout to Luka. When I arrived in Luka’s town some people picked me up. They drove me to a mansion that Luka had set up for me. I had pizza, I had hookah there, I had the fruit. They escorted me to the show… Luka said Shaq ain’t nothing gonna happen to you when you’re in my town Mr O’Nealovich, that’s what they called me. So shoutout to Luka and Goran Dragic cuz their people really set it up for me.”

Shaquille O’Neal and Luka Doncic recently met up in Croatia…

Shaq: “When I arrived at Luka’s town, some people picked me up. They drove me to a mansion that Luka had set up for me…”

Luka: “Nothing’s gonna happen to you in my town, Mr. O’Nealovich.”

(via The Big Podcast) pic.twitter.com/2Y8ym8meQb

Mr. O’Nealovich certainly has a nice ring to it. It also makes for a refreshing change from the nicknames we are already familiar with such as Superman, the Diesel, and Shaq-Fu. Mr. O’Nealovich revealed that Luka Doncic rented out a 4 bedroom villa, just for him, by the ocean.

“I got there and Luka said we know you’re staying at a hotel, but we want you to stay at some place that he had for me. It was right there on the water, four bedroom villa, he had that blue mist hookah.”

To those who are unfamiliar, Hookah is a form of smoking a large tobacco pipe with various flavors. In any case, we know that Shaq had a really good time when in Croatia.